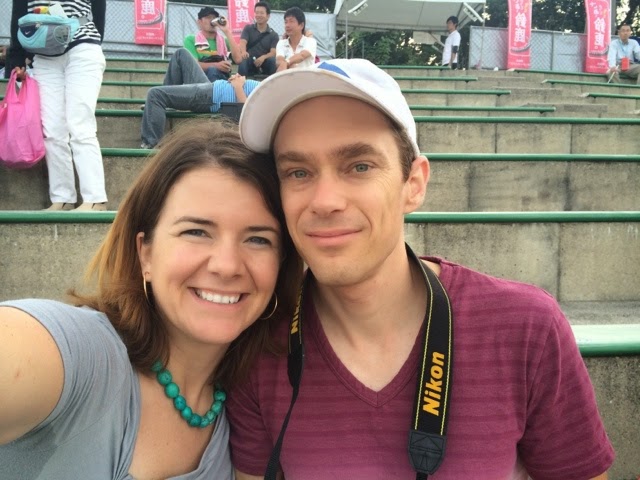 SMS and I decided that we wanted to see a Formula 1 race last New Year’s Eve when we thought it would be really cool to see the race on the streets of Singapore.  While that would have been awesome, a September trip did not work out due to my interview travel so instead, we decided to check out the F1 race at Suzuka.  The track is known for being technically demanding.  We thought it would be fun to check out a big international sporting event in Japan so we definitely didn’t feel like we were settling when we decided on this race.

One nice thing in Japan is that, among our friends, everyone always seems to be traveling and doing exciting things.  At some point, we mentioned the trip to our friends Carl and Liz and they decided they would like to come too!  Hooray!  I booked a pretty inexpensive ryokan, which was hard since many of the hotels were booked in Suzuka and Nagoya.  The ryokan was in Nagoya which added to the drive but apart from a $300/night/couple hotel, that was the only option.  Plus, even on the F1 discussion websites, it talks about how most fans stay in Nagoya for the night.

On Saturday morning, I went to base to pick up the rental car.  The rental price paid for itself in the form of complimentary toll tickets that come with the rental.   Tolls in Japan are quite high; for example, this trip was about 250 miles and the tolls were just over $100 each way.  I picked up Carl, Liz and gluten biscuits (pastries from the bakery downstairs from their place), then swung by our place to pick up SMS who had gotten a little extra sleep since he is not a morning person.

The drive took about 5.5 hours.  It felt longer since the speed limits on the highways are so slow, 80-100 km/hr.  There is a lot of speeding since the roads are well-designed and people are in fast cars, but I’m always a little nervous since our license plates make it really obvious that we’re not exactly from around here.  We went straight to the track (no traffic!), parked and went inside.  Unfortunately, we missed the qualifying race but we saw another race with speedy Porsches so that was cool.  We walked around the Circuit and took in the scene at the main entrance.  The afternoon and evening were gorgeous- it was hard to believe a typhoon was on its way. 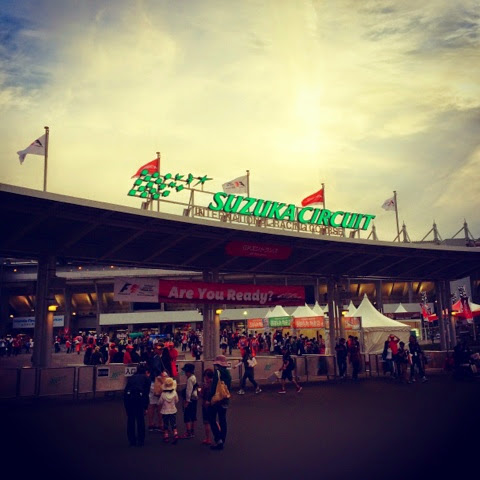 After we sat in the grand stands to see the rich people’s view, we went to the local mall and had dinner at a delicious sushi go-round.  We also bought a terrible DJ pop remix CD for the car since there was no adapter jack in the car stereo.  There was a Tower Records in the mall and we were thrown back to the mid-90s with the CD listening stations, large earmuffs and CDs everywhere! 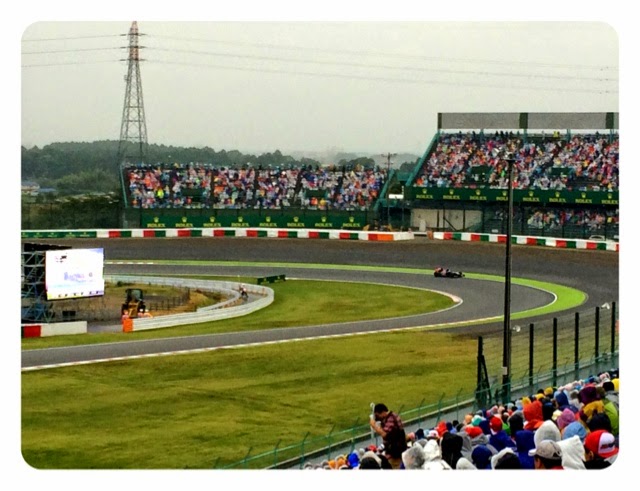 The next day, we got up and went out to breakfast at a really cute place, Bluebirds.  SMS spotted it and decided that was the place.  Good call!  It felt very Hiyama-ish inside.  It had a beach-y feel and was right next to a bike repair and rental shop.  There were delicious egg plates with eggs, sausage, biscuits and hash browns; yummy looking omelets; breakfast tacos; and breakfast sandwiches on biscuits.  I had the egg, bacon, tomato biscuit with white gravy and it was delicious! 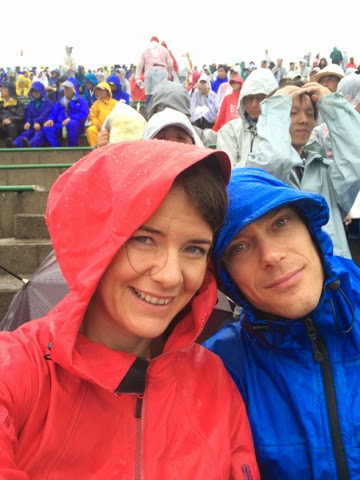 Then it was off to the races in our best hats (just kidding, it wasn’t a Derby!).  On Sunday, the typhoon was definitely moving in.  We got rained on several times, occasionally quite heavily but we had a great time.  It is breath-taking how fast the cars go.  From our seats, we could see them zip out from the end of the straightway before slowing for the first curve.  Then, the cars would speed up before slowing again in the three curves in quick succession.  The rest of the course we could see on the Jumbotron, but usually when something exciting was happening like an amazing passing maneuver or a hydroplane skid-out. 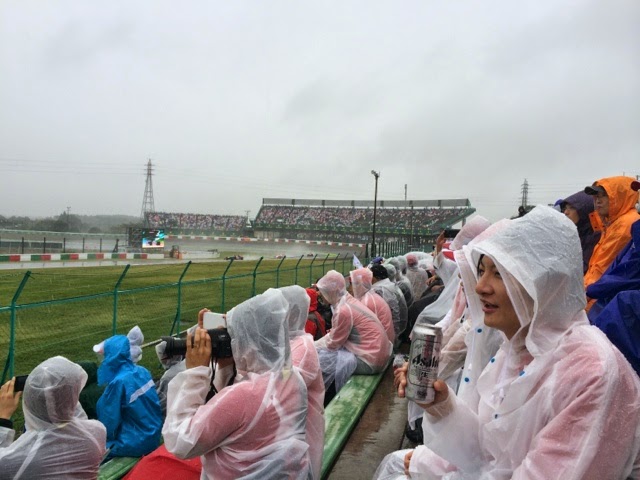 The race went for 46/53 laps.  40 were needed for full points to be awarded.  The safety car was out for about 10 of those laps, but otherwise, the race was on.  Hamilton, currently number one and a known performer in the rain, won.  The race was called after a double crash into a sidewall- first, one guy crashed and then during the yellow flag, another guy skidded out at the same curve but unfortunately, hit one of the large pieces of recovery equipment and he left the track straight to the hospital.

After the race, we piled back into the car and headed out.  There was only a small amount of traffic but we made it home in about 6 hours.  It was a lot of driving for what felt like a relatively short race but it was really fun to go to a F1 race and learn about a new sport.  Travelling with friends was also a lot of fun, especially since we got along so well and travelled really well together.