Take two non-golfers and a world-famous golf resort and what do you get?  A great weekend!  SMS and I headed to the Inn at Spanish Bay this weekend after my boss gave us the stay as a gift.  Apparently, he and his golf partner each had a room through an event they were playing but his friend wanted to stay in the house he owned in the area.  Based on the houses around Pebble Beach, I’m sure it was a real dump.

Well, we were very happy and appreciative and off we went, battling rain and end-of-rush-hour traffic to get to the hotel.  The room was really nice.  The main room had a gas fireplace with two armchairs across from the two double beds that had really luxurious bed linens.  The bathroom had a separate vanity/sink area and an inner toilet/sink/shower and bath.  The bathtub looked like an amazing soaking tub but I didn’t check it out because, despite all the recent rain, CA is still in drought status.

We woke up in the morning and noticed that are room was a partial ocean view room- beautiful!  We lazed around until the siren call of pancakes became too great for SMS’ stomach.  We headed over towards Sticks, the small restaurant by the first tee.  We shared blueberry pancakes and poached eggs and hash.  Fortified, we headed off to the Coast trail, where we walked 2 miles each way between the Inn and Bird Rock.  It was high tide and the ocean waves were pretty turbulent.  It was so beautiful.  It was nice to walk because I’ve driven on 17 Mile Rd before and it’s hard to sightsee to my heart’s content while driving.

After our walk, we split a club sandwich by the outside fire pit.  It was so delicious- lots of turkey on sourdough toast (yeah!) along with perfectly ripe avocado and cooked bacon.  So delicious, in fact, that seagulls tried to join our lunch (boo!), so we moved inside.  One gull was tolerable but then it opened its big mouth and called all its friends.  I know a flock of circling seagulls may not sound as scary as, say, hawks or vultures, but it was still disconcerting.  I was not about to share my sandwich!

Then we went upstairs and I laid down on the bed for 5 minutes.  It ended up being a two hour nap that even SMS participated in, which has never happened before!  It was awesome!  Unfortunately, the one experience does not seemed to have converted SMS to the love of naps but hey, maybe I can work on him.

I went for a quick run and cut it slightly short when I saw how beautiful the sunset and the light was on the nearby dunes.  I ran and got SMS and we walked along the shoreline, exploring the tide pools and walking on the boardwalks among the dunes.  It was fantastically beautiful.

After our sunset walk, we headed back to the room to get ready for dinner.  I thought it would be nice to eat in one of the Inn’s restaurants so I had made reservations at Peppoli.  We had a great Italian dinner.  The highlight was how amazing the pasta was.  It was super fresh and homemade.  It was the best pasta I’ve ever had.  The sauces didn’t quite hold their own against the pasta, but they were still pretty good.  We ended with a shared almond cake for dessert and it was really a great meal.

On Sunday, I slept in.  I woke up at 7 but then started dozing until after 9!  Usually when I’m up, I’m up but I guess I was getting into the resort lifestyle.  We ordered room service because I’ve loved room service ever since ordering it with Jenny and Theresa one New Year’s.  It felt very luxurious and I’m glad we did it!  SMS had the waffle and I had scrambled eggs.  After breakfast, we headed over to the tennis courts where we played for about an hour.  SMS was a total ringer since I didn’t find out until we were there that he had been on a tennis team for two years.  Unfair advantage!

After tennis, we headed over to the main Pebble Beach Inn to check out the famed Lodge.  Along the way, we stopped at a few 17 Mile Dr. sites to include the Cyrus Lookout and the Lone Cyprus Tree. 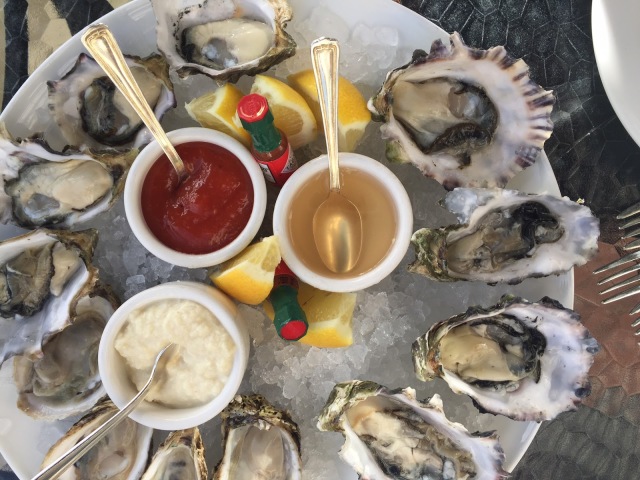 At the Pebble Beach Lodge, SMS wanted to see the clay tennis courts, which were waterlogged and closed but still interesting to see.  We ate lunch on the terrace even though I was completely underdressed.  Whah.  I like meeting attire requirements but apparently, they’re loosened during the day and lunch was delicious so it was worth looking like a slob, I guess.  We went all out and started with a  dozen oysters (yay!) followed by an artichoke and a hamburger, which we shared.  It was really awesome and the view was spectacular.  We were overlooking the bay with Carmel across from us.  Even though they were setting up tents for the AT&T Pro-Am in mid-Feb, there was still plenty of beautiful scenery to take in and enjoy.

After lunch, we headed out to Point Lobos State Park, which was stunning.   We hiked in the Cyprus Grove, where the Monterey cyprus and other local trees are in their natural element.  We talked to a nice older couple manning the Park Service Info Booth and after turning over our car keys (yikes!), we got a pair of loaner binoculars.  I’m glad we had them because we got to see whale spouts and the backs of gray whales!  I was really hoping to see a tail or a whale flipping through the water like the old Echo the Dolphin Sega game, but I wasn’t that lucky!

After the park, we headed back to the Inn.  We decided to head back and be responsible adults.  No snow days for us unlike so many people on the East Coast!  It was a great weekend and a beautiful setting to stay and explore.