Oh my goodness!  SMS and I had the best luck on Saturday.  Due to serendipity and SMS’ love of racing cars, we were able to take a tour of a private car museum owned by a local developer (who clearly has done very poorly for himself)!

Let me back up.  On Saturday, I got up early and went to the old apartment to straighten up before the movers came later in the day.  I headed back to the new place to pick SMS up for our Saturday morning run club.  We semi-regularly attend the Mountain View Runner’s Club Saturday morning session, which is a 3.5 mile loop on Steven’s Creek trail.  It’s a really nice group of people and afterward, we hang out at the Starbucks for a little coffee-fueled socializing. 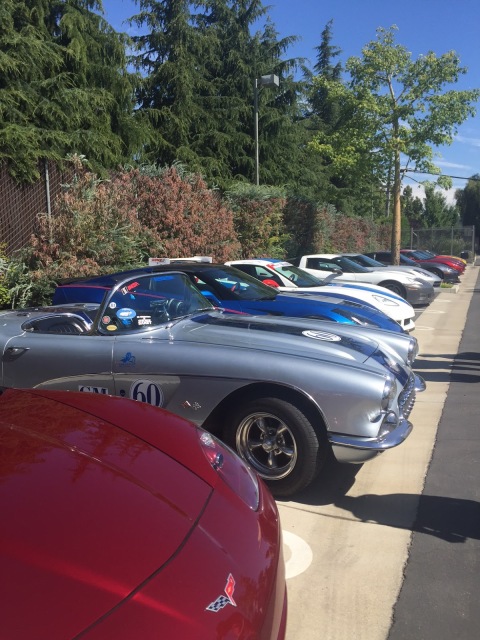 As SMS and I were getting ready to leave, he said he wanted to check out the Corvettes down the street.  I hadn’t noticed but apparently, a lot of Corvettes had been driving by including two with racing modifications and vinyl appliques.  We said goodbye to everyone and walked down the street.  Inside an open gate, there was a mini-auto show in the parking lot that was filled with Corvettes!  I estimate there were about 30-40, which was very cool.  We wandered around and talked to a few people.  We didn’t really know what was going on but then I started talking to a woman who had just pulled up in a more classic car with her husband.  I complimented her on her shirt, which was a gray t-shirt with a silver and light blue rhinestone Corvette.  She invited us to join them on their group tour of the Auto Museum.  I initially declined (what a moron!) because the movers were supposed to come between 11-1, but I fortunately came to my senses.  SMS and I each paid our $20 to the Corvette Club of Santa Clara President and with that, we were on the list!

While we were waiting to get in, we talked to a guy who had extensively modified two Corvettes about 10 years ago as a side project.  He had majored in auto design in college but spent his working years designing video games in Silicon Valley.  [Aside: We never exchanged names and I suspect that he is really well-known in certain circles but hey, we were there to talk about the cars.  Plus, SMS and I are just not super-in-the-know about that industry.  But he did mention that he was good friends with the guy who programmed Pong and the guy who hired Steve Jobs at Atari.]  Anyway, he had added a Super Charger to the engine to bring it up to 550 hP.  He had also taken off most of the panels and replaced them with carbon fiber elements so the car was about 100 pounds lighter than a normal Corvette.   He had the tooling done and panels made in a factory in San Diego.  He had 14 orders for the car but the factory went out of business so only two were made.  What was incredible to me was that the two cars were already committed so he had to deliver both of them; aka, he couldn’t even keep the car he made!!  But, alls well that ends well.  He bought the car back from one of the purchasers about 7 years later so he now has Production #0001 in his possession now.  Incredible.  What a feat of design and a display of integrity to keep your word on delivering a product you promise! The car is called Anteros, after the Greek god of requited love I’m guessing.  It was absolutely beautiful.

At 1000, it was time for the tour!  We went inside the understated, but beautiful building.  The outside landscaping was very zen.  Inside, the docent gave a brief introduction.  They asked for no photography and everyone was very respectful of that request.  I did take one picture by accident as I silenced my phone, but it was of the floor so I think it’s ok to display my masterpiece.

The cars on display were incredible.  There were many early cars, like three 1910-1913 Simplexes.  There were several Pullmans, Ferraris and Porsches.  Most of the cars were one of two/three known to be in existence.  My favorite car was a 1934 Bugatti with a deep mustard yellow alligator interior.  It was a breathtakingly beautiful car…the informational sign near it said that it drew such crowds, it was once hard for the then-owner to approach it and drive it away at the end of a car show!

Alas, all dreams must end and ours ended abruptly with a call from our neighbor that the movers there a few minutes before 11.  Argh!  When are movers ever early!?!?  Anyway, we rushed off and left, but felt incredibly lucky to have experience such an amazing museum.