Aka, the day we became cheeseheads!  SMS and I both love cheese and he has made some in the past so I thought it would be really fun to take in some of the Swiss cheese (ha ha) towns.

After a delicious, huge breakfast included with our Le Charlot stay, we headed to the train station, bellies full of coffee, juice, pain au chocolat and baguettes topped with Gruyere and local dried meats.  We took the local train to Montreux, and ended up on the Montreuz-Berner Oberland.  It is one of the scenic railroad routes with a Pullman-car train with 1915 vintage coaches.

Now, a note on the Swiss Rail scenic routes.  There are several available, to include the “Chocolate Train,” the Glacier Express and the William Tell.  They are interspersed among the regular train timetable so even on a regular route, you will take the scenic journey, only faster.  This was the more attractive option to me when trip-planning because we were already spending a lot of time on the train and although it was enjoyable, I wasn’t looking to increase our time- I wanted to get places!

I also found it difficult online to figure out how to make reservations for these routes and where to pay the supplement fare.  So, I just gave up on it.  I liked the flexibility that just hopping on the train offered.  We used our smartphones/Google transit maps a lot to get the timetables and it worked out really well. Check with your carrier on international rates before you go in order to avoid horrible roaming charges.  We use Sprint and 2G data was included in our plan.  Calls would have been expensive but we didn’t need to make any.  It was an available option, though, in case of an emergency.  I believe other US carriers may charge a fee for a month’s worth of access in a particular country- say, adding Switzerland to your plan for a month would cost roughly $10 on AT&T, for example.

Another incredible aspect of our Swiss rail ticket was the inclusion of the PostBus system and let me tell you, those bad boys go everywhere.  I would recommend checking the timetable because the frequency may be low, but we ended up taking a cheese tour that was one of the vacation highlights and in order to get there, we needed the PostBus to get there.

First, we took the Pullman train to Chateau-d’Oex.  We had the second-class ticket and got kicked out of first when we accidentally went there after second-class was filled with a huge Chinese tourist group.  Our high-life was nice while it lasted!  In Chateau-d’Oex, we walked to the bus stop, waited 25 minutes and took the 174 to La Maison de L’Etivaz, a 20-minute ride that was beautiful. 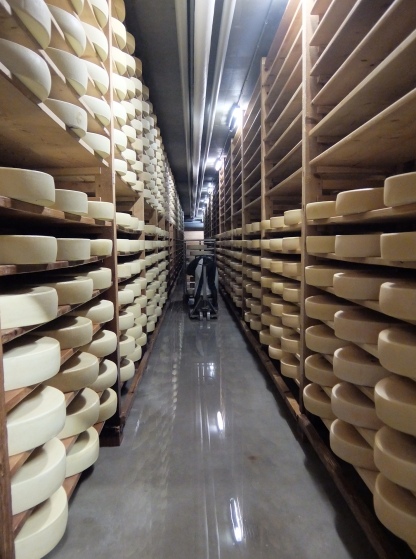 La Maison de L’Etivaz is the visitor center and main cellar for the aging of L’Etivaz cheese, an AOP-designated cheese.  69 families make the cheese from cows that graze between 2000-3000 metres in the Swiss Summertime.  They eat the wildflowers and sweet grass and are milked up in the mountains.  The initial cheese is made there and transported the Maison for aging.  The process is very rustic, as the AOP criteria detail that the initial stage must be boiled over a wood-burning fire.  The two of us watched a video in a room clearly able to handle larger groups.  It was an interesting overview of the process and then we were taken on a tour of the cheese cave by Dorine, an English speaker who works at the place.  Please note, this tour was arranged way ahead of time by email.  During the tour, we marveled at all the wheels and, in particular, the robot briner-cheese turners that help develop the cheese during the aging process.

Afterwards, we sat at a picnic table by the river and had the best cheese plate of my life. It was such an idyllic scene and we were eating the different ages of l’Etivaz and we felt very smart from all of our newly acquired knowledge.  We met a local who had never gone farther than 3 km from the area.  He was nice initially but then my French started failing me and Dorine stopped translating, which made me suspect he may have started to veer off in somewhat unnice things to say.  Eh, we just ate our cheese.

We shopped in the little market and I bought a big slab of butter, which I proceeded to carry around with me for the next few days.  I think this may have initially embarased SMS but then we both embraced the fact that, yes, we were carrying around some damn delicious butter!

We took some pictures while waiting for the bus and then off we went, back to Chateau-d’Oex.  Our next stop was the more touristy (but still awesome!) Gruyères, which we reached by train.  We walked to the old castle and toured around.  We watched a little video which was pretty missable and then walked around the ramparts.  Then we walked back to the cheese visitor center, where we walked through the exhibit, which included a large glass wall where we could see into the cheese-making area.  In contrast to l’Etivaz, Gruyère is a little more industrialized, with gas-fed fires and much more stainless steel and larger volume.  At the visitor center, we had moitie-moitie fondue with bread, pickles, onions and potatoes because it was something I really wanted to do in Gruyères, even though it was totally the wrong season for it!

We hopped on the train and headed for Montreux.  We walked along the shore of Lake Geneva, taking in the sights of JazzFest.  The JazzFest mainly takes place inside a large concert venue.  We had thought there would be more street performances, but this turned out not to be the case.  In planning the trip, I really didn’t research the JazzFest too much and as a result, we didn’t really get the true experience since tickets were sold out or very pricy for the venues and there weren’t as many free events as I assumed.  Either way, we saw a beautiful sunset and had a nice time.  SMS also discovered Movenpick ice cream and a new favorite was found! It also made me happy that we had picked the more quiet Vevey to stay- I thought it was a little more charming.  Maybe we’ll go back again and see more of JazzFest and maybe explore the surrounding vineyards, which we didn’t do this vacation.  I would definitely go back to La Maison de l’Etivaz.  That was amazing! 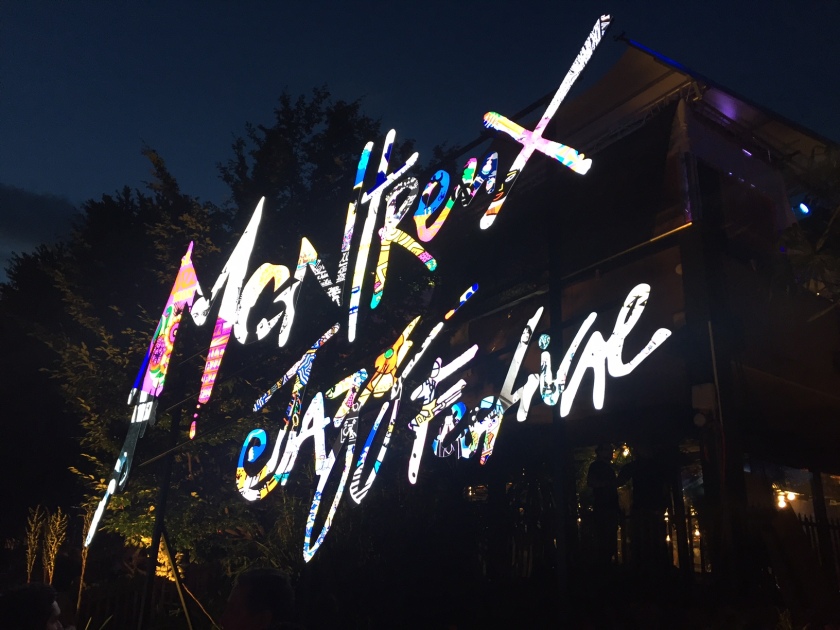 One thought on “Switzerland, Day 5: L’Etivaz and Gruyère”