I feel like these entries are getting boring- not because they are all about my awesome vacation (naval-gazing travelogues- not boring!  Right?  *crickets*) but because each day starts out with a variant of, “We started with a delicious breakfast.”  Well, if that’s wrong, I don’t want to be right because, yes, we did start out with a delicious breakfast!  I also love Nespresso so I had two espressos to start my day off with a zing!  I may also be typing this after a second cup of coffee so I’m feeling extra fiesty!

After breakfast, Renata drove us to the train station and asked about our plans.  We told her we were off to Belinzona.  She asked if we had seen Ascona yet and when we said no and that we weren’t planning on it, she looked a little sad for us and told us to make sure and see it next time.  She wasn’t pushy about it but it was clear that we were going to miss out if we didn’t see it.  So, at the train station, we decided to lock up the suitcase and take the bus to Ascona for the morning.

This was a great decision!  Ascona was lovely.  We walked along the Lake Maggiore promenade and ate a second breakfast at the outside lakeside lounge of a very beautiful hotel (Ristorante Marina at Hotel Eden Roc).  I am not completely convinced that non-guests are supposed to just walk in but we did and everything was fine.  We paid for our juice, coffee and croissants and had a very relaxing time looking at the lake.

Then it was back to our plan.  We walked to St. Pieter’s Square and then took the bus back to Locarno.  We picked up the suitcase and headed to Bellinzona.  SMS and I had both been to Bellinzona in the past so we weren’t planning on going to the three castles.  They are pretty incredible so I highly recommend.  It’s just this stop was focused on going to SMS’ priority- eating lunch at the Ristorante Grotto Bassa just outside of town via bus.  The restaurant was a beautiful shaded spot with old stone tables and benches.  We ordered two cheeses and the tonnato-sauce, which I think was served on top of veal.  SMS had been here right after college and had very fond memories. 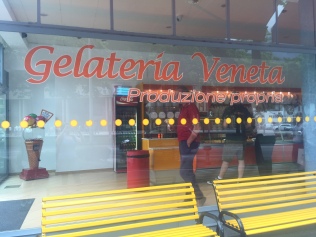 While we were waiting for the bus on the way back, SMS bought some Nocino.  Yay!  My new favorite liqueur!  When we got back in town, it was time for…Gelato!  Gelateria Veneta was the best of the trip.  I had the Amarenata, a creamy cherry that is hands-down my new favorite ice cream.  I combined it with Mascarpone, which was also tasty.

I really liked the street that the train station was on.  There were some cool shops, including an incredible jewelry shop that was closed both times I went by.  Ah well, better for my wallet at least!  There was also a small Italian store with lots of local staples and a gourmet feel.  I browsed around, not hungry thanks to our recent meal but still taking in all the potential deliciousness!

We took the train to Lugano, where we had an Aperol Spritz while waiting out a huge thunderstorm.  We took the bus into town where we stayed at my favorite AirBnB find.  It was the tourguide room located in a “secret hallway” of a fancy hotel.  When it’s not used by tourguides for groups staying at this nice hotel, it is open for AirBnB travelers. All the amenities of the hotel are included, it’s just the room is much more Spartan and there is a detached bathroom.  I highly recommend it!

We took a late nap and then headed out for dinner.  We went to the “Spaghetti Store” since many casual places were already closed and the fancy places were booked.  It wasn’t the best meal of the trip but it did the job.  A bonus was that we were on the lake and the storm clouds at sunset produced the most spectacular double rainbow.  We felt lucky to be outside and see it! 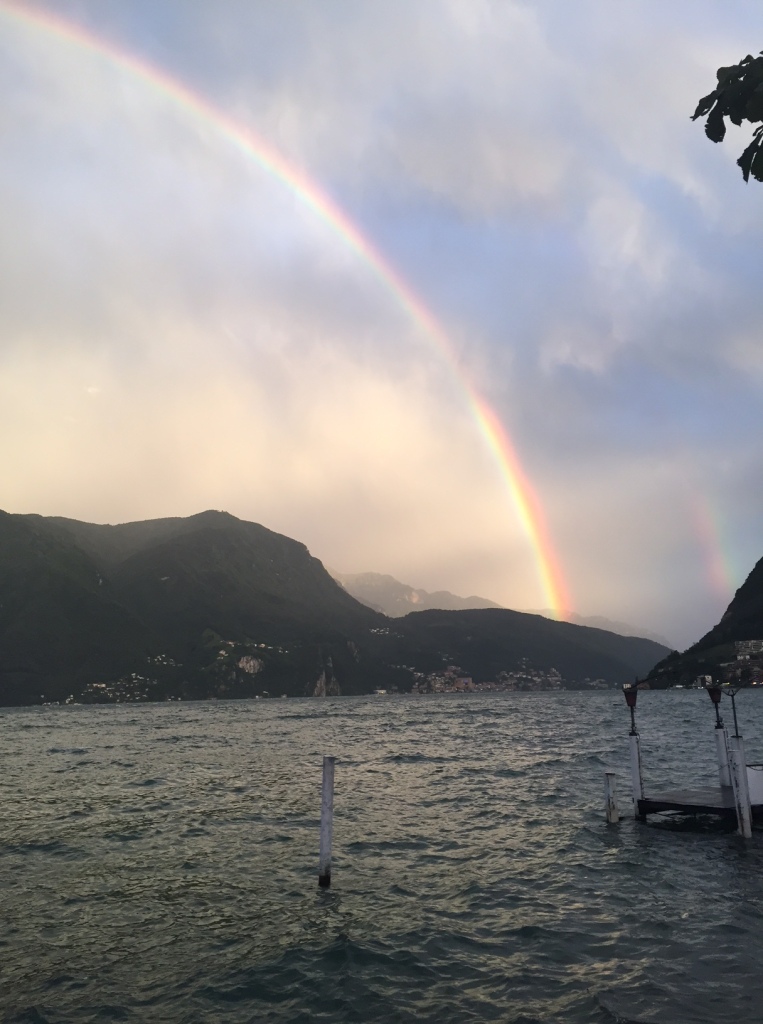