We woke up and saw this outside our window:

Yes!  We were right next door to the U.S. Space & Rocket Center in Huntsville.  Since Mark is in the industry and I had Space Camp fever in the mid-80s (is there anyone of a certain age who didn’t?), we had decided to make a day of it during our trip.

We headed over after a breakfast at the Marriott hotel, which was good.  Not great, but it did the job.  Then we drove one parking lot over, parked and went inside.  While the “drive” sounds super-lazy (it was), we didn’t know exactly where to go and it was super-humid.

In the museum, we checked out almost all of the exhibits.  There was a room filled with patents and prototypes from work done at the Center over the years.  There was a recreation of Wernher von Braun’s office, which had an interesting citation on the wall discussing how he built the German missile defense in 1937 and, next sentence, came to the U.S. in 1945 to work on the space program.  Well, a there was a pretty major world event during those years which he was very likely complicit in the horrible conditions and workers’ deaths at Peenemünde.  Michael Chabon’s Moonglow, while a work of fiction, explores this issue from the perspective of a man who loved space, worked on Operation Paperclip and then, when he saw Peenemünde during the search for von Braun, became completely disillusioned with his former hero.  I really want to read this book on Operation Paperclip- maybe later in the Summer. 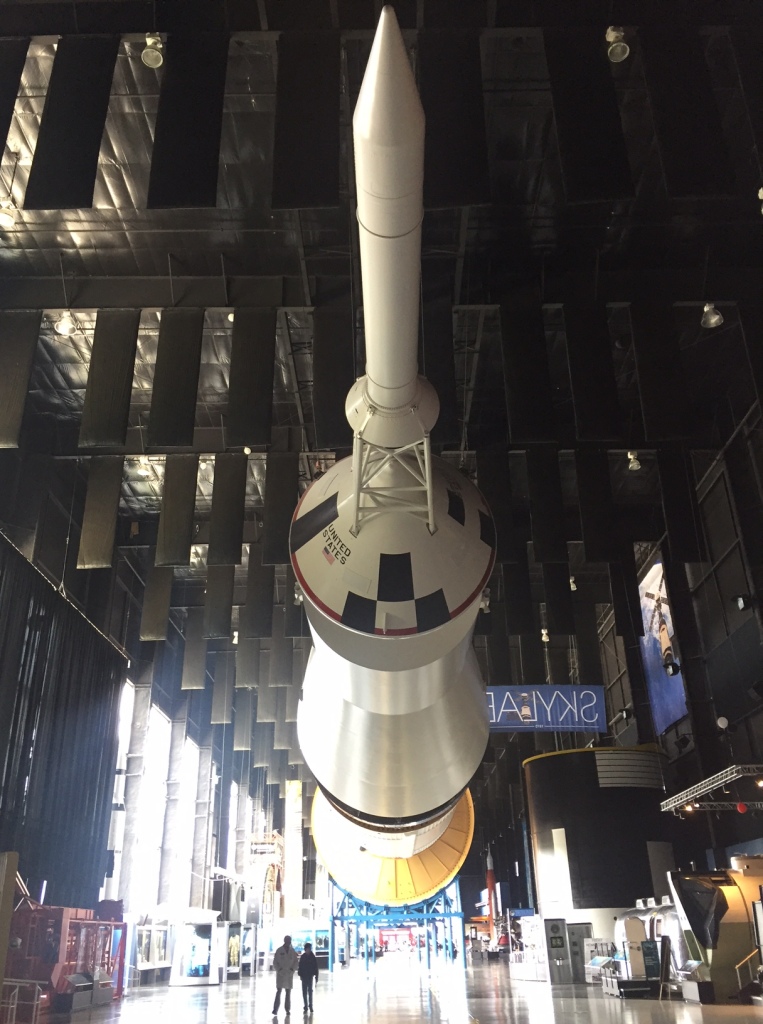 After that, we headed over to the Saturn V building, which is really impressive.  There is an upright Saturn V outside the building and inside, there is one on its side, sectioned into each stage.  It was very cool to walk underneath the rocket while reading the displays on the space race.

At 1230, we had bought tickets for the bus tour, which took us over to the Marshall Space Flight Center.  We went to the International Space Station’s Payload Operations Center, aka the ground support for all of the experiments underway on the ISS.  The full-size mock-up of the ISS lab was pretty cool.  I felt a little sorry for the office workers who had a bunch of tourists stare at them like a zoo exhibit, but they didn’t seem to mind (don’t people say that about zoo animals too?).

The coolest part was seeing the historic rocket stands, where different rockets were tested.  It shows how much more powerful the rockets became over time by the increasing size of the stand.  The Saturn V stand was huge and a little further in the background, we saw the stand for the new generation of rockets.

After five hours in the museum, I think we pretty much saw everything!  We got in the car and drove South.  Although we were staying in Montgomery, we decided to eat dinner in Birmingham, which was an excellent choice.  We drove past the Sloss Furnaces, which were really cool-looking and I think it would be really cool to see a concert there or take some pictures.  We were, however, on a mission and that mission was food.

We went to Saw’s Soul Kitchen and it was off.the.hook.  Oh my gosh, I would be there all the time if I could.  SMS ordered the pork & greens, which is a deceptively simple names for one of the best BBQ dishes I’ve ever had.   There was a bed of cheesy grits with a nest of collard greens and pulled pork.  Crispy shoestring onion rings were the topper.  It was amazing.  But I wasn’t even jealous because I had also ordered well!  I had the sample platter with chicken wings, pulled pork and chicken with the best side of fried okra ever! We shared (yay!) and it was incredible.  I highly, highly recommend the restaurant if you are able to go.

After dinner, because we weren’t hungry, I thought we should get ice cream!  We went to Big Spoon Creamery and split a two-scooper of blackberry goat cheese and buttermilk peach.  It was amazing.  Best dinner of the trip (spoiler alert?!).

Somehow, we weren’t in a total food coma so we drove to Montgomery to stay the night before heading out to Vicksburg the next day.  We explored the city the next day but that will have to wait for the Day 5 recap!