Hven/Ven, Sweden is a beautiful island in the Øresund strait between Sweden and Denmark.  The Denmark spelling adds the “H,” the Swedes just stick with Ven.  It’s claim to fame is Danish astro

nomer Tycho Brahe but since 1660, the island has belonged to the Swedes.  It is the most idyllic, beautiful place with the coast line called Backafall rapidly rising up 50 meter bluffs to otherwise flat island.

I visited for the day in 2010 and I’ve always wanted to go back to Hven.  This trip allowed me to show it to SMS.   This time, in order to make our own experience and enjoy it more fully, I booked an overnight stay in a “Glamping” tent at Camp Ven, with towels and linens provided. See, I had read that most Swedish cabin rentals expect a person to bring their own linens and since SMS and I were packing lightly, I wanted a “linens provided” option.   Otherwise, renting a small cabin would have been equally as wonderful.

Crowd around the Little Mermaid

They day started off with some excitement. We had left Hotel Ibsens for the ferry- there’s only one a day!- with plenty of time. When we were 2/3 of the way there, SMS asked me if I was ready for my presentation next week. I froze. I suddenly realized I had left my poster in the luggage storeroom of the hotel. Fortunately, it was only one stop away but after giving SMS directions to the dock and my suitcase, I ran. 16 minutes later, I was back with poster in hand. Whew. That would have been really bad.

So, although slightly sweaty, we made it!  We sat outside and enjoyed the ride. 90 minutes later, we were in Hven. We took the bus to the stop closest to Camp Ven and walked the rest of the way. The bus made me realize that even though credit cards are accepted almost everywhere, the key is almost. I’m glad I had the small change for the bus so take away point- it’s good to have the equivalent of 20 bucks in cash on you as a traveler.

We checked in and, once we dropped our bags off inside the tent, we were glamping!  Fun!  Our first activity was biking the island, which is really the main point of being on Hven. With a few mild inclines and occasional steep ones from the bluff to the shore, it is useful to have a bike with 3 gears. 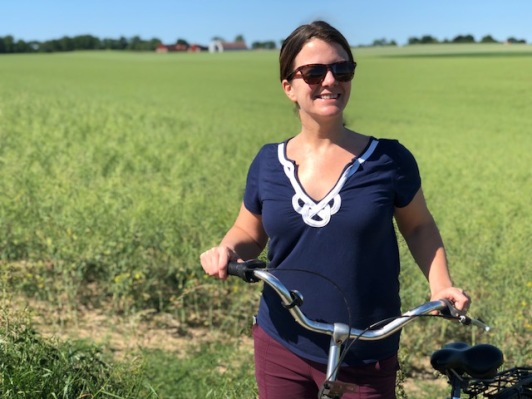 We rented from Camp Ven but they were the same bikes available at the large rental spot just up the hill from the ferry landing Bivekkin.  I would recommend renting from there because that way, you can bike back to the ferry. Since I had a smallish carryon, I would have gotten a bike with a cart. This would have been helpful the next day when the bus didn’t show up and we had to walk to the ferry. I am pretty sure it was because it was a holiday (June 6 Sweden National Day) but there was no holiday schedule listed on the bus stop sign.

Anyway, logistics advice aside, biking around Hven is amazing. The colors are so vivid between the green fields and blue sky. The biking is pretty mellow and goes along marked paths that are mostly packed gravel, occasionally with some looser bits and some pavement.
We went to Norreborg beach and went swimming. We walked to the edge of the dock and jumped in off the ladder into chest deep water. It was cool but not terrible. The Pacific near San Diego is much worse!  We dried out on the rocks and then continued on. We went to the smaller port Kyrkbackens and had a drink at Bread on Wine.  The kitchen at that time was closed, but they were open for drinks.  There were a few places on Hven that seemed to have opening hours posted but I’m pretty sure it was kitchen hours since we went to a few places outside of the posted hours and could get drinks (beer, coffee in the a.m.) but no food.
We had a feast of a meal back at Camp Ven, which had an associated restaurant Strandvagen with outside seating with a gorgeous view of the Øresund. I had the ribs, SMS had the chickpea stew, and we split ice cream for dessert. I had a really nice French rose that I’m hoping to find back home.
We finished our dinner and got ready for bed. It was early but we had been battling jet lag this trip plus our bellies were full!