In reading these trip synopsis, I would caution you that part of the fantastic-ness of this trip was the incredible weather we were lucky enough to experience.  Apart from one drizzly morning during my conference when I was inside anyway, it was bluebird skies all day, every day and the days are quite long in a Swedish June.

So, we woke up and ate at the Hotel Royal.  The breakfast spread included a waffle maker station so it got the A+ of the trip from SMS.  Then we walked towards the water to go to the Emigranternas Hus.  The old customs house, now a casino, was the center of emmigration from Sweden in the late 1800s-early 1900s.  1.3 million Swedes, about 1/4 of the population, moved to the US and took over Chicago.  I kid, I kid, they went to a lot of places in the US although Chicago was a huge destination.  The small museum located on two floors highlights the trip between Gothenburg and England and then England to the US.  It is really well done with a few interactive displays, such as walking through a re-creation of a ship’s berthing area, complete with (stuffed) rats :(.  Upstairs, there are more display signs with texts and pictures to give more detail on the movement out of Sweden.  Basically, many people were running out of farmland as the plots got smaller and smaller as they were divided up among the next generation.  Stories were told of little country mice Swedes that got caught up in the city life of Gothenburg and swindled out of the remainder of their passage money.

There was also a slightly perplexing set of poster-board-like displays on racism in America.   So, the text first states how Swedes were treated pretty well in the US for unknown reason (implicit in the text is “Because Swedes are $#%^ing AWESOME” as there’s a lot of understated but powerful Swedish pride!).  Then it point out the contrast between how Irish were treated, which was almost as bad as African-Americans which then leads into a discussion of slavery all the way up to Black Lives Matter.  In three paragraphs.  This seems to give short-shrift to a topic on which there are whole museums dedicated to, but at least they tried?  After pointing out how racist America was/is (and I’m not arguing that this is incorrect), the Swedish author did point out that Swedes aren’t perfect either (*what?!*) because they liken the attitude of Americans to the Irish as similar to the Swedish disdain for “Finnish males in the 1960s migration.”  Sigh, poor Finns. Anyway, it’s a comprehensive but slightly weirdly abbreviated, off-handed addressing of a pretty big topic.

After our museum tour, we met with one of the staff and did some genealogy research.  It was absolutely fascinating.  I may have a new hobby!  SMS didn’t have a lot of info- a name, an approximate birth year, and a departure date.  From that info, we figured out great-grandmother Thekla’s birthday (we were one year off) and found her whole family in the Parrish record.  She had 5 siblings and the oldest fraternal twins were 16 years older than her.  Her mother had her at age 45 in 1870!  This sounds very 2018!  The record showed that one of her brothers left for Amerika in 1885 and then she left with her sister in 1887.  It was really neat to see how records last and can tell stories so many years later.

After the deep dive into genealogy, which I think I was more into than SMS even though it wasn’t my family, it was time for lunch!  On our way to lunch, we were passed by a flatbed truck packed with Swedish young people wearing yacht captain outfits (guys) and traditional dress (ladies).  They were clearly celebrating with loud music and sound makers.  I’m pretty sure it was a graduation celebration but I’ll be honest, I’m not completely sure. 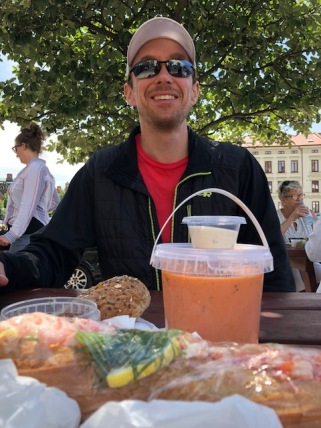 We went to the Feskekôrka, an indoor fish market.  There were beautiful displays of fresh seafood and some ready-made options.  We opted for a picnic at the self-serve tables outside.  We bought herring with lingonberries, a shrimp sandwich, and fish soup.   It was very tasty.  It was also a bit cheaper than going to one of the restaurants attached to the fish market but we were able to eat the same things offered there. 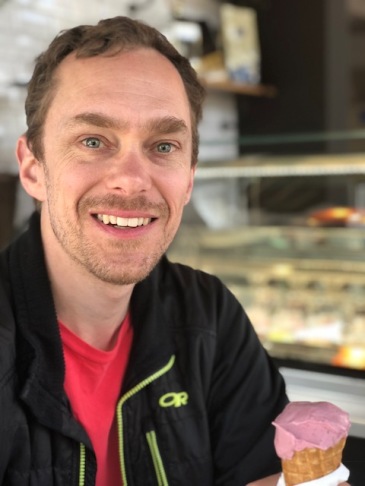 On our way to the train station, we passed the Gelaterian Goteborg.  Sorry Hven, I found another paradise.  Oh my goodness.  It was amazing!  It was a super-cute shop with delicious gelato.  I had the licorice which actually tasted like a delicious adffogato.  I can’t get over how delicious it was.  SMS was a trooper and indulged my stop even though I hadn’t thought I was hungry after such a delicious lunch!

After feasting, it was time to continue retracing Great-Grandmother Thekla’s footprints by going to Trollhättan.  Americans may know the place best as the site of Saab headquarters.  There’s now a few museums there but we decided to walk along the Göta canal towards the current (and former) locks, one of West Sweden’s seven wonders!  The Göta canal was completed in 1832.  There were three lock systems to see.  The first was opened in 1801 by King Gustav IV Adolf.  It was a series of eight locks and although too small for exclusive use by the time the canal opened, they were used until 1916.  The second set of locks was from 1844.  Finally, the current lock system has been in place since 1916. 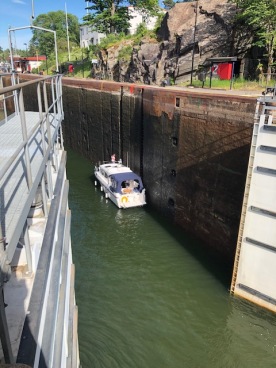 The locks are super-cool.  Each Summer, there are river boat cruise that go along the river as well as thousands of private craft.  In order to navigate the Falls, the locks are used to bring the boats up or down to the necessary level.

After admiring the incredible feats of engineering and taming of the falls, we walked back to Trollhättan to catch the train back to Gothenburg.  I had some licorice to tide me over until we got dinner.  We walked along the Kunsportsavenyn but ended up going a little into the side neighborhood Vasastaden to eat traditional food at Smaka, which was tasty.  We ordered the Smorgasbord sampler, which was a feast!

It was an awesome day, one of those days where we fit so much into it that it makes me wonder why I can’t be that efficient with my time at home!