After the conference, I headed into Stockholm.  Once I got to the city, I headed to the hotel which was on a boat!  Yes, after a less-than-stellar AirBnB earlier in the trip and seeing the boat from an amazing lunch at Oaxen, I had booked a two night stay at the Prince van Orangiën.  It is a former private yacht now turned into a unique boutique hotel.  I booked a room with a shared bath but had it to myself the two nights. 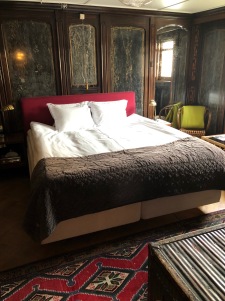 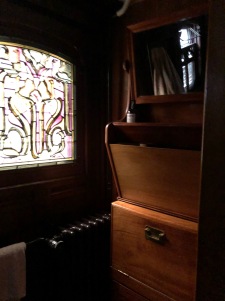 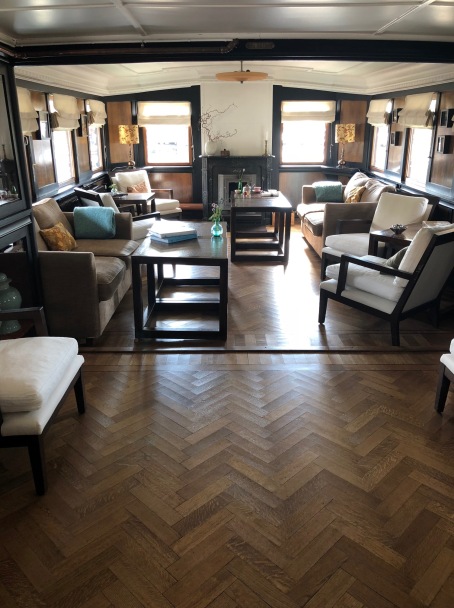 The boat was beautiful.  It was very luxurious with gleaming wood, marble fixtures, and gorgeous furnishings.  There were several deck areas to relax in and the central room was relaxing and opulent at the same time.  Breakfast was served in the mornings, although I could only partake the first morning since I had to leave super early on the second.  I highly recommend it, although I think when I go back in the future with SMS, I would book a room with a private bath just to ensure privacy and access (I sound like I’m talking about a private beach).

So after check-in, I decided to find the cool part of Soderhalm which according to this guide, are south of Folkungagatan. So, really, it seems to be the area of Katrina-Sofia, at least on Google maps.  The hotel lent out complimentary bikes so I biked across several bridges to explore. 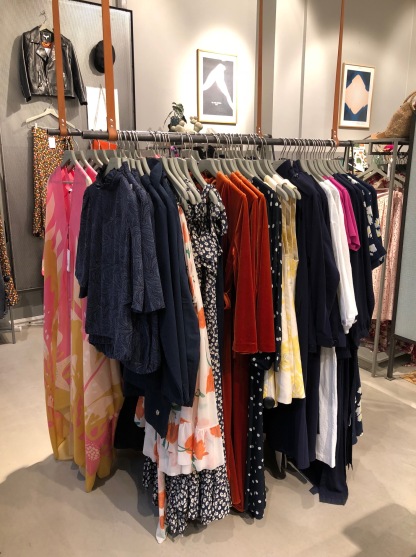 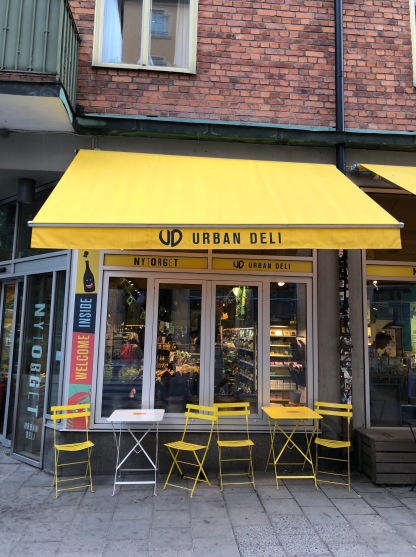 I went to Grandpa and tried on some clothes, leaving with two dresses that will hopefully evoke Swedish cool whenever I wear them.  Then I headed over to Urban Deli to peruse their grocery items (does anyone else like wandering through high-end grocery stores, especially on vacation?).  The store was awesome, although very Dean & Deluca and slightly impractical for a day-to-day shopping list but for a special treat?  An excellent choice.

After eating my snacks across the street in the Park Nytorget, I wandered up the hill towards Sofia Church.  The area’s historic name is Bergsprängargränd.  Based on the occasional information signs (SE/EN), it used to be the Stockholm slums where shipyard workers, rock-blasters and other day laborers lived.  The small red homes are still there but based on appearances, it looks like the real estate prices have climbed quite a bit since then. 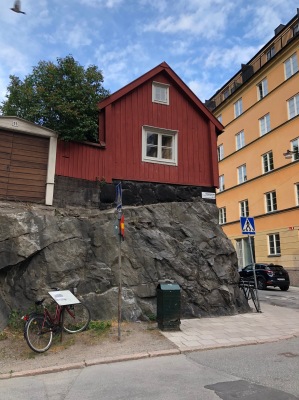 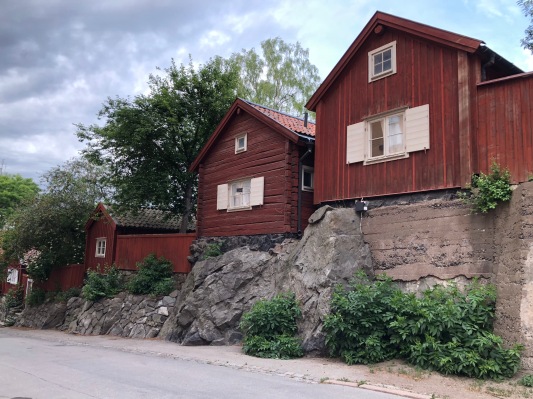 Next, I wandered down the hill to Såzargatan.  This was also a poor shipbuilder neighborhood now almost completely rebuilt apart from a few protected houses.  There are three that are high above the street due to rock blasting that occurred after they were built.  #11 has a door that will open to a fairly significant drop so I wouldn’t recommend taking that exit.  There was also a box with an angled mirror called a “gossip mirror” so you could see who was on the street without having to actually stick your head out to look.  This sounds slightly creeper and antisocial but also kind of awesome.

THEN.  I found the highlight of my wanderings and a place that is very high on my list of recommended things to do in Stockholm.  Reg Anders Fogelströms Terrass has a fantastic view of the city.  Really, you have to go here…and it is not like me to tell any traveller that they have to do anything.  The views are exceptional and it just feels like it completely captures a quintessential Stockholm experience.

There are a few ways to get there.  In addition to wandering through Katrina-Sofia, there is also a staircase near the Fotografiska which is great for my family taking cruises there later this year because the staircase is right across from the cruise ship docks.  Caution, there is a lot of construction there currently (Summer 2018) so it may be hard to cross the busy street.  There is also a way through the Slussen subway station and Katarina Elevator but again with the construction, it is still confusing and a longer walk than the staircase.  But no matter how you get there (take an Uber if you hate to walk!), I promise you, it will be worth it.  Well, at least on a day that you can enjoy the views, aka, maybe not during a storm.

Nearby, there is a small cafe with ice cream in the Summer and warm drinks in the Winter.  I wasn’t hungry but it looks like Fjällgatans Kaffestuga would be a great place for a fika!

Then I walked through a small neighborhood garden and another formerly poor neighborhood called Stigbergsgatan.  Then I went back to my bike and cycled to the hotel.  The evening was beautiful and I took several pictures of the boat.  Then, it was time to go to sleep.  The bed was very comfortable and I drifted off immediately.