Skip to content
AKA, my birthday weekend! Actually, I had a small amount of birthday fatigue just before my birthday mostly because I was a little cranky and just needed nap- or at the very least, a good night’s sleep.
The weekend before my birthday, though, was pretty awesome. The aforementioned crankiness only hit on Sunday. Anyway, that Saturday, we went out on a bar crawl through North Park. It was organized by Matt and included a fair number of his MBA classmates. By the end, there were a fair number of Michelle’s friends though- Brooke, Cat, Colleen and her husband Izzy and me and Mechen! We started at URBN (where they hate the letter “A!”) and had pizza and beer. It only got better at West Coast Tavern where there was more beer and even better, an awesome Bloody Mary. We then went to Touranado followed by Ritual Tavern, which was much smaller than I expected. They have special events there that I’ve seen posters for and I just thought it would be bigger. Oh well, wrong! We ended up at El Take It Easy where I had ridiculously overpriced but delicious ramen. Hey, it was fancy ramen! Then Mechen and I split off and went to Extraordinary Desserts. It was a really fun day but I still feel totally beered out. I wasn’t hung over but I just felt so full. I think beer is slightly tough on my stomach even in smaller amounts. But I do like it- not just the taste but also, the ability to hang out and have a beer. I feel that connotes a more laid-back demanor and chill attitude than being a girl who “doesn’t drink beer.” I know this is ridiculous but still, it’s the association I make in my head.
The next day, Mechen and I made the bike ride to Torrey Pines and hiked the trails. It was so much fun! I felt very fit and North County! It was a 10 mile ride one way and the hike was gorgeous. We stopped at The Secret Cafe in Del Mar, a cute place with sidewalk seating that focuses on Brazilian cuisine. It was delicious! We had a pork sandwich and turkey sandwich prepared similarly. We split half-sies and it was so tasty!
The next day was my BIRTHDAY! Any ennui that I felt the night before was gone! I had a great day in the OR and managed to get out the hospital around 4:15. My car was no longer street legal since the registration had expired 3/26 so I went to get an oil change and smog check. Guess who had no oil and a filthy filter? This girl’s car! Whoooo, way to get my money’s worth! Kidding! I know, bad me, just b/c Bluey is rapidly approaching beater status doesn’t mean I should kick it and abuse the poor car. And bonus, my engine doesn’t rattle anymore (that was only going on for a couple of days. really!).
Then, I picked Mechen up at Santa Fe Depot. Oh, the Coaster, you’re the best! We went to Enoteca Devanti which was awesome! At first, we had planned to go to The Pearl so I could get a free entree. I liked the idea of a restaurant rewarding my birthday, yeah! But then I decided I wanted something different and I had heard amazing things about Enoteca so off we went with a pre-dinner stop at Starlite for drinks and happy hour appetizers, which consisted of a white fish salad on rustic bread and beer-battered fried mushrooms. Both were delicious and we drank Kentucky Colonels. Mmmm, I love you Starlite but I wasn’t craving your menu that night so off to Enoteca!
Enoteca was delicious! Jenny and Tawnne had been there and we basically got their recommended dishes. We had ricotta cheese mixed with honeycomb on rustic bread. This dish was awesome! I love the slightly sour taste and charred crustiness of the bread. Although neither of those two characteristics sound like they would be a good thing, OMG. It was so good. We also had a beef carpaccio on greens with cheese that was good but paled in comparison to the other two dishes. Plus, the cheese was so sharp that it overwhelmed the delicate carpaccio. But, still good!
Oh, but the best dish was the mascarpone polenta with the daily ragu, which was pork shoulder that night. A delicious, creamy polenta with a hearty ragu prepared separately then spread out onto a wooden serving board. The polenta was the base layer with the ragu in the middle. It was amazing. We ate almost all of it and were going to take a perfect lunch-sized portion home but someone who was in charge of remembering may have forgotten due to the haze of two birthday Chianti glasses. Oh well, more reason to go back! 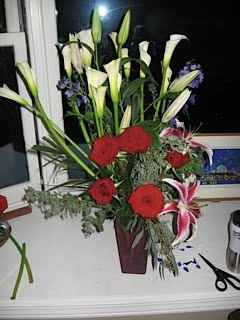 When we got home, I saw a beautiful bouquet of flowers with a present underneath! Mechen is the most thoughtful! I loved the flowers with gorgeous, velvety roses, trumpet lillies and star lillies. The present was an owl pillow that I had like in a Solana Beach shop. He topped it all off with the sweetest card. It was an awesome birthday!