After our Redwood stroll, we headed off to San Francisco!  First stop- lunch for the best meatball sandwich ever.  To be totally honest, the first one I ever had was the best (in 2009 with my co-worker Chris), but this one was also pretty delicious!  After lunch, we checked into the hotel and then drove through the Presidio to the Golden Gate Park.  We walked around and came upon Stow Lake.  There were people paddle boating and it looked like so much fun and quintessential tourist that we had to do it!  We rented a paddle boat and had so much fun going around the lake.  It was beautiful and wonderful.

Next, we headed to Hog & Rocks for dinner.  We feasted on chef’s choice $1 oysters (all day Sunday!),  Trotter Tots, ham sampler (Iowa, Spain, Italy) and heirloom tomato salad.  We walked around the Mission district for a little bit after dinner and tasted chocolate at Dandelion Chocolate.  We picked up a handout on how chocolate is made (magic) and bought a chocolate sampler to do more tastings at home!

The next day, it was on the the outdoors-y phase of our vacation.  We left San Francisco and headed out to South Lake Tahoe.  We stopped for lunch at Magpie Cafe in Sacramento.  So delicious!  We split a Banh Mi sandwich and a Smoked Trout and Del Rio Tomato sandwich.  They were both so, so good.  Sacramento (at least the part we were in) seems like such a cute town.  But, no time to dally, we were off on our next adventure!

I called ahead and booked a room at the Strawberry Lodge.  It was the perfect place to stay because it was right next to Lover’s Leap, our rock climbing destination!  We were there early enough in the afternoon that we were able to climb a two-pitch route that afternoon called The Farce.  It was fun but I was rusty on my outdoor skills.  I’m glad we did it because I was more prepared for the next day’s climb.  After The Farce, we headed into Tahoe.  We took some sunset pictures, then headed to MacDuff’s for some dinner.  I had a delicious chicken pot pie with puffed pastry crust and SMS had a stew.
The next day, we headed back over to the rock and climbed the three pitch Bear’s Reach.  It was a great climb and the view was incredible.  I loved the Tahoe area and want to live there!   Maybe I’ll buy the Strawberry Lodge although if I do, I may have to fight the deranged Billy Treat.  He’s a young guy who I’m fairly certain is legitimately crazy and goes around telling people about his big plans for taking over the place.  He is a “pro snowmobiler” who knows everyone and wears a medal to prove it.  The medal, however, is for 10th place in the 1997 West Division Sectional.
After the Bear’s Reach, we hiked into the Phantom Spires and climbed the two-pitch Gingerbread route.  It was a pretty quick climb.  After a great day of climbing, we went back to MacDuff’s and had another tasty meal. 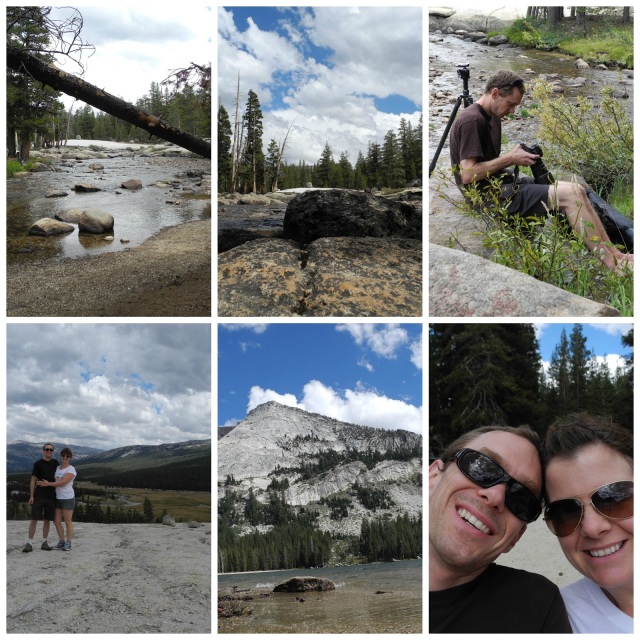 The next day, we headed out to Tuolumne Meadows.  We stopped at the Tioga Pass Mobil station and ate lunch at the famous rest stop restaurant.  We headed into Yosemite, where admission was free for active duty!  Our campsite was pretty sweet and we were by a beautiful river where SMS took some more amazing photos.
The next day, we hiked to Cathedral Peak and had an amazing 6 pitch day.  The views were unbelievable and I felt so amazing and accomplished.  As SMS said, I never would have imagined myself on the top of a huge peak 9 months ago and here we are!  It’s an amazing adventure!
We headed out that afternoon and spent the night in Bishop at a lovely bed and breakfast named Joseph House Inn.  The innkeeper was very sweet.  Breakfast was delicious and tranquil since we ate outside on the patio.  The yard/gardens were beautiful and it was such a nice find for our last night!
We headed home with two more stops.  We went to Manzanar, one of 10 Japanese interment camps from WWII.  We toured the site and visitor center, where we watched a documentary with several former detainees.  It was really sad and almost incomprehensible that rights and freedoms were so quickly and easily taken away from an entire group of people based only on their ethnic background.  It really highlighted the importance of preserving and protecting individual rights of citizens in order to prevent mistakes that go against the ideals of freedom and democracy.
We also stopped at the Mt. Whitney visitor center.  I hope to hike that mountain someday!  After that, we made the long push home apart from a quick picnic stop to eat our “Mule kicker” sandwich that we had bought at the Erick Schat bakery in Bishop on our innkeeper’s recommendation.  It was pretty delicious!