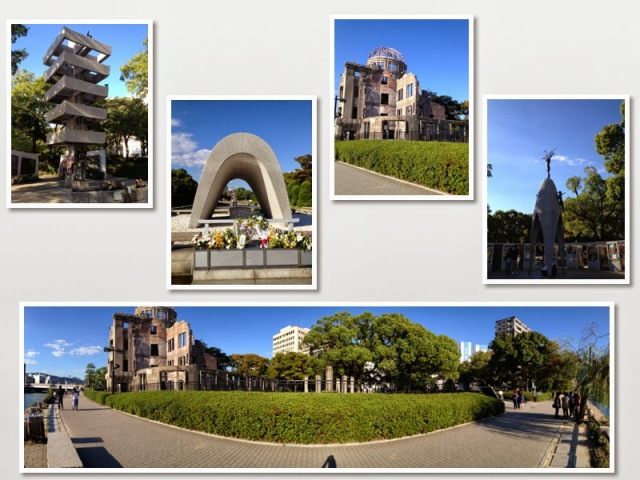 We arrived in Hiroshima and walked along the Peace Promenade and went to Atomic Peace Park.  I went twice in two days: once on Friday afternoon and once on Saturday morning before leaving.  I skipped the museum this time but the park itself is very solemn and hopeful at the same time.  There are many memorials and signs with multiple translations.
I just finished “Unbroken” and they talk about riding through that countryside and witnessing the destruction.  That first, the trees had no leaves, then there were no trees and then there was nothing.  It was horrific but at the same time, the reason why the POWs were free, rather than dead.  The Japanese knew they were losing the war and had issued an “All-Kill order” for all POWs later that August.

It’s amazing how the city rebuilt.  And now the hope is that no city or place on earth has to go through that destruction again.  One new sight I saw this time was the marker that indicates the hypocenter, the location where the bomb exploded, 600 m above the ground.  It’s outside the park on a street that is otherwise completely modernized and contains several parking structures.

On Saturday, as I was walking to the Peace Park, I took a different route and it was completely jarring to me that all of a sudden, there was the “A-bomb dome.”  It was a striking reminder that it can be so easy to be involved in our daily lives and forget to pay homage and witness to the past.