Although we had plans to take a flight very early on the 30th, I wanted to show SMS the awesome town of Kamakura.

We had a leisurely morning and then headed out. We took the Keikyu to Shiori and then walked over to the JR Yokosuka station. The walk was about 10 minutes, but we were taking our time looking at the ships and dormant rose bushes.
We got off at the main Kamakura station. We went onto Komachi Dori and looked at a lot of the cool shops. There are beautiful textiles, crafts, washi paper and lots of tasty food. We stopped for soba Nakamura,an, a place highly recommended on a random blog I found. We waited in line for about 25 minutes, but we watched the soba noodle maker chef while we waited. It was fascinating!
The soba was delicious!  It was al dente and had a coarseness to the texture that made it clear it was handmade, rather than the more slippery machine made noodle. I loved the basic sauce to dip the noodles in. After the noodles were gone, I was given a pot of broth to fill the sauce cup up for a delicious ending soup. I was jealous of SMS who stayed with the basic set because I ordered a mushroom sauce that had gelatinous mushrooms in it that I didn’t like as much as the simple noodle. It’s ok though- I know what to get for next time!
After lunch, we walked to the Hachiman-gu shrine where stalls were being set up for New Year’s. Then we walked back to the station and took the electric line three (four?) stops to Hase.
There we saw the Daibutsu (Big Buddha) and got the obligatory BB shots. There were so many people there!  Next we went to the Kannon/Hasedera temple.  The views from the top were spectacular.
After all the temples, we tried to find our temple of coffee, the Honolulu coffee company. Ostensibly, there was a branch in Kamakura according to the company’s website. Google maps took us to the place below. Pretty sunset but no coffee.
Then we headed home and went to Hamakura for dinner. We met up with Jen, Adam and Karl. It was great company and delicious food. I think Karl and I were the winners in the food department with our Hamakura sets of amazing sushi, really good tempura, a jelly dessert and soba that was good, although was nowhere near the amazing ness of our lunch.

Then we headed up to Yokota on the first leg of our trip to Singapore! 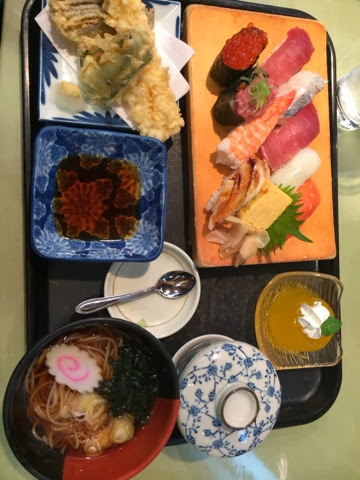