Last week, I looked at my schedule and thought, “Wait a minute…”  On Friday, I had nothing scheduled and nothing pressing was due.  So, I decided to take a three-day weekend!  SMS and I had been talking about rock climbing and how happy it makes him so we decided to take a trip.  He was in charge of the climbing and I was in charge of the camping organization.

So, I went into the tatami room closet and pulled out everything I needed for an awesome car camping weekend: sleeping pads, sleeping bags, little camping pillows, tarp, tent, stadium chairs, foldable table and grill.  We also went shopping and bought some delicious food, along with ice for the cooler.  The menu included beef lettuce wraps, eggs, PB&J and grilled cheese sandwiches.  We also brought curry along but didn’t end up eating it.

Friday morning, I went into work really early to participate in the “Moto Run,” which is a monthly command run.  I hadn’t done it until Friday, which may seem like a strange time to decide to start but this month, the Officers were in charge so I had to show up and represent.  While it was more of a jog than a run, it was fun mostly due to the cadence callers.  I want to learn some good cadences now!

I answered a few emails and then headed home around 8 after making sure my leave chit was submitted.  SMS and I packed up the car and we were off before 10.

The drive up was about 4 hours.  We headed North past Yokohama then made a left West just outside of Shibuya.  There was some traffic in Tokyo, which led to an inadvertent adventure when Google Maps asked if we wanted a re-route.  I pushed the accept button and while I think we saved time, I also think we went down streets that were never meant to be streets!  We went on some side roads near Umegaoka-eki and they were so narrow and full of people.  It was nerve-wracking driving although I was only the passenger at that point!  The neighborhood looked really cool though and SMS and I want to head back and explore.  We will definitely take the train though!

Once we headed West on the Expressway, the cityscape quickly yielded to beautiful green hills.  We stopped at a rest stop for lunch.  It was packed.  We took a few pictures, but I always want to be careful about taking too many pictures of strangers.  Next, we got off the Expressway and headed to the campsite on some rural roads- they were paved but lots of tractors.  We made a brief stop at a momo (peach) stand and bought two delicious white peaches. 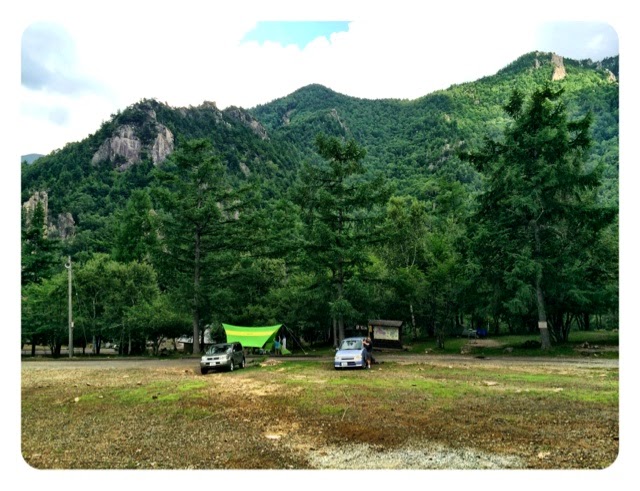 We pulled up to the camp ground and pulled our ticket from the machine, which raised the gate.  For some reason, the gates were on the “American” side of the road, but the rest of the road was driven on the “Japanese/British” side.  We found a gorgeous campsite and set up our gear.  We went on a hike near the large creek to check out some climbing for the next day.  The creek was fun to cross with lots of stepping stones although I have become more hesitant in my old age!  The rock looked great- granite, sticky and lots of features and we were excited for the next morning.

Dinner featured delicious beef lettuce wraps.  We went to bed pretty early and then were woken up by a large group of young Tokyo-ites who pulled into the campground in the middle of the night, set up their tents all around us and then sat around the campfire drinking sake until 4.  I was so mad.  There was so much room and they had to set up there?!?!  *Grumble, grumble, get off my lawn!*  They weren’t yelling but it was pretty rude and I forgot my earplugs.  As they were wrapping it up, I heard one ask, “Nan-ji ka?”roughly, what time is it.  I wanted to yell out, “4, you *%&$#^*&%!” but I decided that would not make me a good ambassador for my country.

Saturday was climbing day!  I felt pretty rested despite the ok sleep.  After breakfast, SMS and I headed to the rock.  We met a really nice guy who had visited the US several times for extended periods so he told us a lot about the routes.  We found one of the best in the area and climbed it- SMS led and I followed.  My climb was not pretty.  I am really out of practice and, I hate to admit it, not as strong as last year, whah!  I’m glad I went because I’m motivated to work on a better fitness routine but it was humbling.  I tore up my hands pretty well so I belayed SMS on another pitch.  By that point, the rock was pretty crowded so we headed back down for an early lunch.  Afterwards, we decided to do other outdoorsy things so we played in the creek (freezing!) and went on a hike.  The Panorama trail was absolutely beautiful.  It was about 2-2.5 miles and led to a breathtaking vista (as the name would imply, otherwise that would be a mean joke!).  We opted for Gruyere, tomato and avocado grilled cheese for dinner and it was delicious!  Maybe I’ll work on my car camping/glamping cookbook next!

After dinner, we headed to the onsen.  For Y400, we got to shower and bathe in the ryokan’s onsen.  Yes, there’s a ryoken on the campground, too.  I imagine a stay is pretty reasonably priced since a fair amount of the facilities are open to campers for a small fee.  Now seems like a good time to go into the campground amenities.  There was a building with flush toilets, a building with pit toilets that actually smelled better than the flush toilet building, a hot shower building, a large kitchen trough-like sink for dishes, many fire rings and a small convenience store in the ryokan lobby.  There we bought our guidebooks.  There are also hibachi grills to rent,  along with charcoal and wood to buy.  My cooking repertoire is going to expand, I can feel it!

That night we had much better sleep since it was cooler and the whole campground was quiet by 10.  *Grumble, grumble!*  We had actually switched sites to be further away from the loud group and the parking lot, which did help but I think it was the Japanese courtesy towards the group that led to the rule following.  The campsite parking lot was full that night, compared to the night before when there were 8 cars, max.

On Sunday, SMS and I were feeling a little lazy so we decided to sightsee rather than force outdoor adventure.  I had read about Matsumoto Castle, which was about 2 hours away.  We ate breakfast, packed up our bags and headed off.  On our way out, we stopped at the cow field I noticed on the drive in.  There were several hay bales with the cutest anime cows printed.  I took several pictures.  We also went into the little market, which was a dairy store attached to a full-sized dairy.  We bought cheese and a small yogurt drink.  Both were delicious!

We arrived in Matsumoto, parked and walked to the castle.  Just outside the gate was a tent set up by the ALSA Goodwill Association with a banner saying, “Free English Tours.”  We decided to go for it and had a great tour by Tadasi-san.  He was very knowledgeable and it was fun to have a deeper explanation of the castle’s history.  One of the more fascinating aspects was his explanation of several stories contained within a large mural painting on display.  From the mid-far right going clockwise, the storyline of an entire battle, complete with heroes, legends, victory and defeat was all contained within this one painting.  It was fascinating.  Tadasi-san learned about it after watching an art history documentary on Japanese National Television.

We also learned that the castles in Japan are ranked based on the amount of reconstruction.  Matsumoto castle is one of the four castles that are National Treasures because they have minimal restoration.  Matsumoto is also the oldest castle in Japan, built in 2 years (!) in 1853.  We also learned about the history of guns in Japan (also contained within the painting) as well as the architecture, complete with the strong belief in shrines, charms and spirits to protect building from fire.  There are shrines within the building and the wooden building have these fantasy creatures from Japan, half-fish half-dragon that are on the roof.  They are supposed to be able to hold a vast amount of water which they can then spray on the building.

After the tour, we bade Tadasi farewell and had a soba noodle lunch before hitting the road, along with everyone else heading back to Tokyo.  After crawling in traffic near Odawara, we decided to brave the coastal route because we figured nothing could be slower than the highway back to Tokyo.  Fortunately, we were right and the road was surprisingly empty.  We stopped at Cantina for Neapolitan pizza and a Caesar salad.  It was delicious.  Then we hopped on the expressway home, unpacked the things that would otherwise smell if left in the car and called it a day.

It was a great weekend!  I really want to go back and I’ve already started prelim planning for a group trip over Labor Day.  We’ll see what comes up between now and then, but if it works out, it’ll be so much fun!