Well, my workweek usually starts off pretty light and then accelerates to Friday.  This week, I had interesting clinics, a few intratympanic membrane injections (boo, sudden sensorineural hearing loss!) and a complex OR case on Thursday that went really well.  My OR patient was someone I knew from several years ago (acquaintance level) and while that extra fact made me a little nervous, the procedure went smoothly and was uncomplicated.  Yay!

On Wednesday, SMS and I went to derby practice followed by a late dinner at Pizza & Pancake in Zushi.  We split a Caesar Salad followed by a pizza each although we had some leftovers.  I ordered a pizza with cheese, miso-marinated ground meat and eggplant.  SMS got a Neapolitan pizza.  Both were delicious!

On Friday, we met up with a couple for dinner in Yokohama.  SMS knows the husband through his photography network and we both met his wife for the first time.  They were fun to hang out with since SMS and Gabe talked about photography.  Gabe also talked about working at a bilingual Japanese pre-school and a little bit about his life as a chef.  We had a great time and I loved the restaurant! 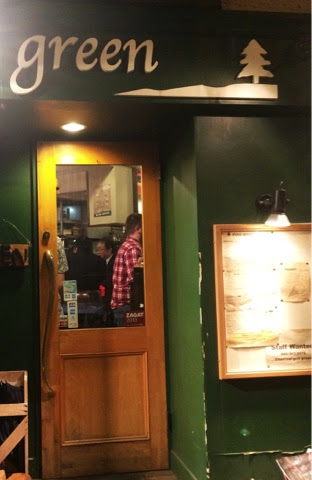 We went to Charcoal Grill Green, Gabe’s choice.  I had no strong feelings either way although I wasn’t overly impressed by the name.  There are actually three restaurants of the same name in three nearby neighborhoods; we went to Bashamichi.  The restaurant has several rustic appearing tables and a counter space.  It is cozy and awesome.  It seems that there is always one English-speaking waiter and there was a bilingual menu.

SMS and I shared local vegetables (including watermelon radish!) with a anchovy/garlic tapenade.  It was delicious although maybe not a first date dish for all you young lovebirds out there.  Gabe and Kristen shared a grilled Caesar salad.  I had a daily special for my entree- char-grilled salmon on a bed of clam risotto served with grilled root vegetables.  The salmon piece was on the small side, but perfectly cooked and the risotto was heavenly.  SMS and Gabe both ordered the char-grilled BBQ pork with wasabi coleslaw.  The pork seemed to be a delicious pork belly and the wasabi coleslaw was a revelation.  There was a nice underlying bite but nothing overwhelming.  It added a layer of complexity to what is normally a very ordinary side.  Kristen ordered char-grilled pepperoni pizza, which got good reviews from the rest of the table although I didn’t try any.

At a restaurant this good, I felt we had to get dessert to cap it off!  Gabe and Kristen shared a chocolate mousse while SMS and I shared the daily homemade chestnut (kori or marron) ice cream.  There were huge chunks of chestnut held together by the background of ice cream.  It was delicious! I also had a coffee, which I like with dessert even though I occasionally pay for it at bedtime.

Afterwards, we decided to grab a drink at Antenna America, a bar specializing in American (and mostly West Coast) microbrews.  The pours are a little less than a pint and the atmosphere is nice.  We hung out a bit before heading back to Yokosuka.

Saturday, I hung out around the house while SMS went climbing with a new rock climbing partner we met at Thanksgiving.  That afternoon, we went to Ikego to watch a roller derby bout.  SMS and I ended up score-keeping which was fun, especially once we got the hang of it.  I’ll be honest, I may have been looking at the wrong team for the first two jams, ha ha.  After the bout, we headed over to Hiyama and had salmon fish ‘n’chips at Gazebo.  The salmon was delicious and the fries (with malt vinegar ) were awesome.  I think in the future I will be a little more of a fish ‘n’ chips purist and go with the flounder or mahi mahi.  At this restaurant, we had a salad instead of dessert.  Go us!

On Sunday, we had a lazy morning followed by a SMS photo extravaganza.  He had two back-to-back photo shoots followed by a photography class for me and our friend Jen.  I learned a little bit about my camera and then took Jen’s sons out the playground while SMS and Jen worked on photographing for Jen’s Etsy products.  This evening, I cooked from my Jerusalem cookbook- “Turkey & Zucchini burgers with green onion & cumin.”  It’s served with a sour cream and sumac sauce, except I used zitar instead of sumac and chicken instead of turkey.  It was a hit and I have a few more recipes from the cookbook planned.