We woke up in the blackout darkness of our room in the Mandarin. Then, we raised the automatic window screen and we got to see our awesome view again to welcome the morning. We packed up and decided to eat breakfast at the hotel. It turned out to be an expensive idea, even after we decided to order a la carte. Oh well, we had a delicious dim sum breakfast even if the price made it seem like it should be served on a gold plate that we’d get to keep. I didn’t want to have to deal with our bags but maybe next time, I’d recommend just going to the airport and eating there. The airport is beautiful with lots of great food court-style restaurants.

We took the Airport Express from Hong Kong station and checked in to Bangkok Air. Security was super smooth and really fast. Then, we were surrounded by shops and restaurants. We wandered around for a few minutes before heading to out gate and then it was off to Bangkok!

In planning this trip, we could have easily made a day of traveling from Haneda to Siem Reap via Bangkok but I wanted to see the cities we were passing through so I decided to take the time-intensive route. In Bangkok, I booked at the Chatrium Hotel which is right on the river. It’s a little south of the major tourist sites, but near several other nice hotels like the Shangri La and Penninsula. It’s gorgeous with beautiful gardens and an infinity pool overlooking the river. Our room was like a small apartment and very nicely furnished. We had a partial view of the river and were really happy.

We took the train into the city and transferred to the BST. The airport express no longer exists so it was about half an hour to Phyathai station, where we transferred to the BST to Saphan Taksin. There, we had awesome timing and pretty much just walked onto the hotels river shuttle. We arrived at the hotel in about 5 minutes and it was a very cool entrance. [As a sidenote, although seeing the city public transport was cool and the shuttle boat was awesome, our cab ride back wasn’t that much more expensive and was half an hour vs. 75 minutes, approx. Just make sure the cabbie runs the meter and if he refuses, just get out.  Since our time in Bangkok is so short (we have one more long layover), I think we’ll cab next time.] 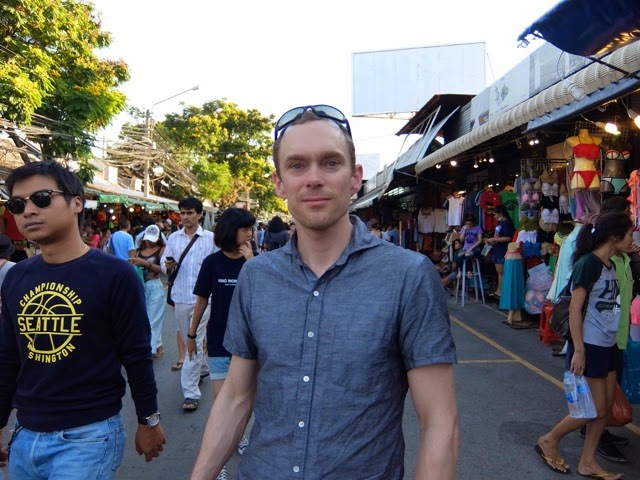 We headed out almost immediately to the Chatuchak weekend market since it was already 4 and the market closed at 6. The market was awesome!  We wandered around and quickly grabbed some food. We had amazing mango stickie rice, slightly less amazing vegetable spring rolls, water, Thai ice teas and coconut ice cream. Yum!  We wandered a lot of the stalls and I scouted out some upcoming purchases, namely elephant pants and shorts. I didn’t buy them there but maybe in Cambodia. Afterwards, we headed back by cab since we were tired. It took us 3 tries to get a cab that would run the meter, which resulted in a fare 1/3 the quoted flat rates by the first two.

Then, we went poolside and watched the sunset with a Singha beer. It was gorgeous. Then we headed out to the street and had some awesome pad Thai.

After dinner, we went for a quick swim followed by a foot massage. It was pretty awesome. Then it was time to crash!  I was so tired and also relaxed from the massage. This vacation is awesome!