O divine Master, grant that I may not so much seek
to be consoled as to console,
to be understood as to understand,
to be loved as to love.
For it is in giving that we receive,
it is in pardoning that we are pardoned,
and it is in dying that we are born to eternal life.

The prayer of St Francis was a special one to me as a child.  Since we were close to Assisi, I really wanted to go during this trip.  SMS and I drove and parked at Parcheggio Poste, the highest parking lot near the old city.  This turned out to be a good idea because it meant through the day, we meandered downhill through the sights then power walked uphill for the return.  Since I find it hard to “meander” when walking uphill, I thought this was the way to go.

First, though, we walked a little more uphill to the Rocca Maggiore, built in the 1100s.  From the top, there are beautiful views of Assisi and the surrounding valley.

Next, walked to Piazza San Rufino and went inside the cathedral.  Afterwards, we went to Osteria Pozzo Della Mensa for an early lunch.  We had gotten the rec from the rest of the family and we were eager to try the boar ragu.  It did not disappoint! 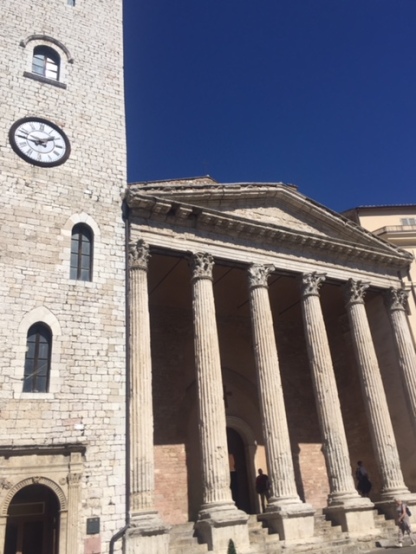 We had bought a combo ticket to explore the archeology/buried ruins of the temple of Minerva, which is the best preserved Roman temple front in Italy although it has been repurposed as a church.  We went to the archeology museum, walked through the buried ruins and went into the church.  It was very interesting.  We bought a gelato afterwards to keep up our strength.

Next, we went to St Francis basilica, which we ended up approaching from below.  There was fairly tight security at perimeter.  We  started in lower chapel where we saw pilgrims in fervent prayer at the tomb/crypt of St. Francis.  It is definitely a moving spiritual journey/destination for many visitors.  Next, we went to the upper chapel which was far less crowded.  We read the pamphlets to get a better idea about the art and architecture but it is such a vast, rich place that a tour would be the best way to see it, I think. 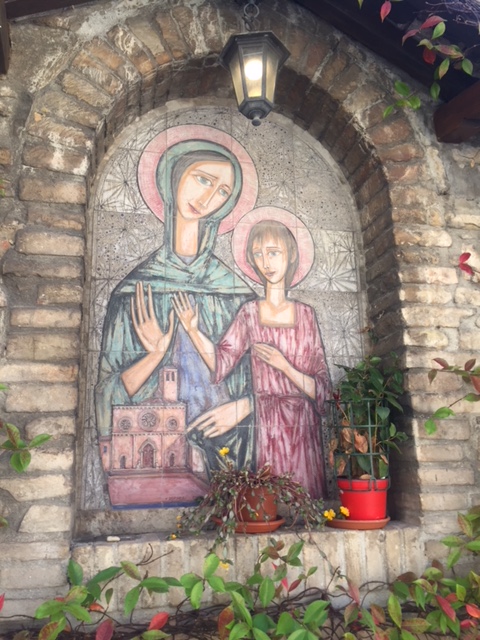 We walked back towards the car, stopping at a cafe along the way for some postcard writing.  I’m not totally sure my cards ever made it- the stamps were for some alternative postal service, which seems sketchy.

We went back to the house.  The family went to the nearby La Pieve Vecchia for dinner.  We shared good pizza and salad although the winning dish was delicious pasta with shaved truffles.  It never gets old!