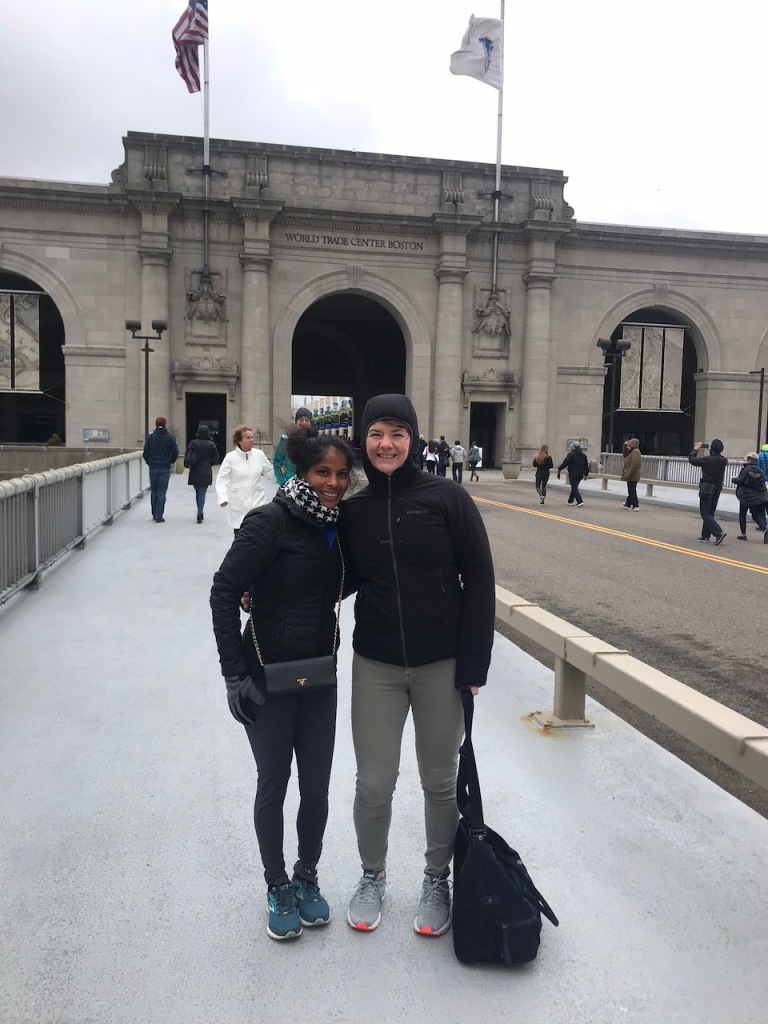 Last year, Jyostna and I requalified for the Boston Marathon.  Unfortunately for our dreams of running together, my time was too slow to make the registration cut-off time.  Yes, I know, how are there seemingly two different standards for entering the race?  Well, since the Boston Marathon has become increasingly popular, a stricter cut-off time has been used the last five or so years rather than the listed qualifying time, which is based on age and gender.  The year we both ran (2016), the cut-off time was about a minute and a half faster than the qualifying time.  I thought my time for 2017 would be ok since I ran just under two minutes faster but the cut-off turned out to be about 2.5 minutes.   Sad trombone sound!

Since it was so much fun last year, I thought it would be fun to spectate.  Well, Mother Nature had a different idea of fun (more later!) but Jyotsna and I decided to have a Boston weekend getaway.

We met up mid-morning Saturday.  We were in the Seaport area, where the expo was held this year.  We walked out our hotel and saw a line straight ahead. We joined it but it didn’t seem to be marathon-related!  Instead, it was for a limited release beer for Trillion, a well-known (except to us, I guess) Boston microbrewery.  Since I had never stood in line for a beer release before, we decided to do something new.

A few purchased beers later, we dropped them off at the hotel and headed to the Expo.  It was  a little less crazy than last year although that’s not saying much.  Jyotsna picked up her number and then it was time to shop.  I bought a pair of running recover flip-flops and a muscle massager.  When SMS heard about the later, he exclaimed that I was going to end up with a closet full.  He may be right!

After the Expo, we headed out to dinner.  We went to Pastoral ARTisan near our hotel since a lot of places were really crowded. It was a mellow dinner and then we headed back to the room.  Sunday was a beautiful day and again, we were pretty mellow.  We went to the Isabella Gardiner Museum, which was beautiful.  It was really fun to show one of my favorite museums to a friend who had never been before.  The highlight was an exhibit of four Fra Angelico reliquaries that had not been reunited in years.  The Gardiner owns one and the Florence Museo di San Marco owns the other three.  They were masterpieces and displayed really well.  I also enjoyed exploring the rooms in the main museum for all the John Singer Sargent paintings, since he is one of my favorites.

For dinner, we had a pasta meal at Sportello.  I had an interesting pasta dish that looked like the Buggle brand of chips.  It was incredibly tasty and different from any pasta dish I think I could make.

Then, it was Marathon Monday.  One word for the weather: YUCK!  It was rainy, windy, and cold.  Jytosna was an incredibly brave soul and headed out into the elements.  I stayed in bed.  Hahahaha.  I went out for coffee then came back and watched the race on TV for several miles.  Then I walked from the Seaport area to the finish line area.  The security was impressive but not overwhelming.  I got there about 5 minutes before the first runner crossed.  It was an America woman!  Go Desi Linden!  A few more women finished then the first male crossed- an amateur from Japan.  Gamba!  What tenacity.  Relative to their normal speeds, they were moving slowly and it was clear the weather had a major, major effect.

After seeing the elites, I stayed out to cheer for a bit but then took shelter at the Oofos party.  Jyotsna and I had been invited the day before.  I thought there would be more regular customers, but it seemed to be more of a corporate party and I felt like a bit of a crasher.  Everyone was very nice though and once they heard I was in the Navy and had run the Boston last year, I was golden.

Then I got a text alert!  Jyostna had just crossed the 40K mark!  I ran out, saw her on Heldesford and gave a loud cheer!  Then I cut through to Bolyston and cheered her on there!  She looked strong!  After she crossed the line, I decided to hop the fence so we wouldn’t get separated.  SMS says I look for reasons to hop fences, especially if cops are nearby.  That’s not true!  If it were, I would work harder so I could so it with Parkour flare!

I’m glad we met up because she was shivering and fatigued!  We got an Uber after going through the line then it was time to get dry and go out!  The rain let up a bit and we headed over to North End.  We ate at Neptune, which we were so happy to get into because last year we were unable to.  At the restaurant, J saw a woman she sat next to on the bus to Hopkinstown.  Such a small world!  Then we went to Mike’s pastries, where Jyotsna got several well-deserved cookies.

The next day, J left on the early side and I was not too far behind her.  I got another nice coffee before I left and then took the Express Bus to Logan.  It was an awesome weekend and I was so happy I got to cheer on my amazing friend!

Sad postscript: My cracked iPhone met its demise that weekend.  Apparently, waterproof jackets have poor-to-none waterproofing of the external pockets.  I lost quite a few photos (backup those phones, kids!) but fortunately due to this blog, I have the highlights from my newly acquired photo gap.