You guys.  I am not one for formalized bucket lists but for a very, very long time, I have wanted to do the Krispy Kreme Challenge.  To sum up: 5 miles, 12 doughnuts, 2400 calories.  Yes!  To benefit a children’s hospital in Raleigh, there has been a Krispy Kreme Challenge for the last 15 years!

Now, I am a big fan of fitness.  As a result, I have a fair number of beautiful people friends who, while very nice people, cannot imagine eating a dozen doughnuts.  Rather, they try to imagine and they cannot.  In smug, horrified tones with a thin veneer of being impressed, they say, “I cannot imagine eating a dozen doughnuts.  Really?  You want to do that? That’s…amazing.”  I stayed with two of these people when I went to Raleigh and what can I say?  We all bring something to the friendship table.

I also have a husband who is a huge believer in moderation.  He, too, thought the idea was interesting (read: repulsive) but I didn’t care.  This was my bucket list!  And what has been on it for years?  A race that, and I quote, “epitomizes the test of physical fitness and gastrointestinal fortitude.”

Ha, ha. I hope this reads as tongue-in-cheek as I intend because I love my beautiful people fitness friends and my amazing husband.  Sarah and John used to live in Norfolk and now they live in Raleigh. I stayed at their house with their fun dog Cora and we had the best time!  We drank wine, hung out, and, on Saturday morning, Sarah and I ran the Krispy Kreme challenge.  Except that Sarah is getting married in April (to John) and didn’t want to think about working off the excess calories.  So she joined the fun run challenge, where you could eat as many or few as you wanted.  Lame! (But I understand.)

I, however, was in it to win it.  Well, not really since the winner runs it in about 26 minutes.  For real!  Even though it sounds like a total fat person’s race, there are a lot of very fit people who both run and eat very, very fast.  But, I did want to meet the challenge which is run 2.5 miles to Krispy Kreme, eat a dozen doughnuts, then run 2.5 miles back to the start in under an hour.  Now, while running away from a doughnut shop may seem antithetical to some, just keep in mind it’s all part of the challenge.

Well, as you can see from my Finisher’s certificate, I did it!!  I would have been SO!PISSED! if I had eaten a dozen doughnuts and not made the time cut-off. 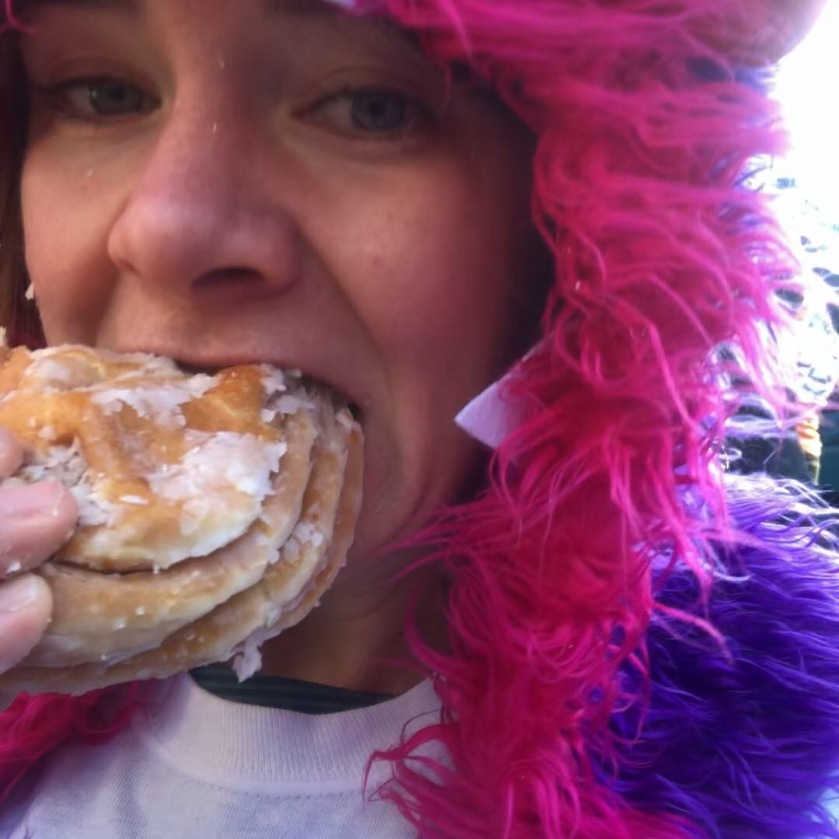 So, instead of gloating for the rest of the post on how amazing I am, I would like to point out some other weekend highlights.  We went to an awesome yoga class on Sunday at a local brewery.  The instructor was badass!  It was a great class with awesome flows and her individual practice, which I saw on Instagram, is insane!

Also, hanging out with Sarah and John was a huge highlight.  I’m actually missing their wedding (huge boo!) in April, but it means so much to me that I can keep up with friends even when we move away from the place where we met.  Cheesy but true!

Finally, if you, too, would like to be a KKC winner, I would like to share some tips I learned.  One, try to run the first half quickly but not so fast that your stomach feels queesy.  Two, I read a lot about stacking doughnuts but it did take me about 12 minutes to eat all of them so honestly, I wonder if eating one at a time and just shooting them down the hatch would have been better?  Three, bring your own water but only drink a very small amount.  Four, if you wear a costume, don’t show up too early because that’s when all the serious runners show up in their shorty shorts and conspicuous lack of costumes.  The costumed people seem to roll up about 15 minutes before the start.

The course itself isn’t bad.  A few rolling, very mild inclines so while not flat, it’s not that difficult.  And this is coming from someone who lives and trains (the running, not the doughnut eating) in a pancake-flat area.