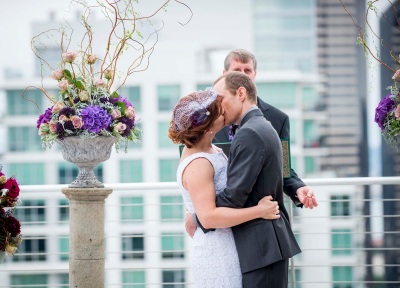 My wedding was awesome.  I know people likely (and should) say that about their own wedding but I had the best time.  It was so much fun and it seemed like everyone there agreed!

I woke up on my wedding day around 6.  I laid in bed until 7 and then got up.  I unrolled the yoga mat from the hotel room and stretched for a bit.  Then I showered, changed and decided to text my friend Carrie.  She is a Williams friend and by herself.  Our other college friend who would make it later was still en route.  So Carrie and I walked to Little Italy, went through the Farmer’s Market and had breakfast near Café Zuccaro.  It was a great morning!  It was so fun to catch up with Carrie, get a great walk and have a pretty zen-like start of the day.  I would have hung out with Brady but she needed some time to get ready, write her speech and pick up some snacks from Trader Joe’s (her idea!  And a wonderful one!).

Time started to speed up a bit and I realized I had to get back.  We walked back to our hotels.  I dropped my bag off and headed over to Va Va Varnish where the Messmer ladies were getting their nails done.  I treated Mom, Nicole, Meg and Brady to manicures and pedicures in a super-cute salon that had the back area reserved for us.  The place is decorated like someone’s chic living room and it was really a lot of fun to hang out, relax and get my nails done since it had been awhile.  Linda also hung out with us but didn’t get her nails done since she has someone locally.  At one point, I looked at the clock and saw it was 12:15 and thought it was crazy how in less than 5 hours, I’d be on my way to the venue.

After my nails were done, I headed back to the hotel for hair and make-up.  I stopped at a flower shop to fill a 36 inch balloon for the photos.  It was an idea I had that I hoped would work out and the balloon did make it into some of the photos.  I had a few “detail-things” that I hoped would work out and most of them did- the balloon, the matting around the wedding poster for people to sign with purple pens, and my hair accessory.  One detail that didn’t work out was that I meant to buy envelopes and cards for people to write little notes since we didn’t have a formal guest book but instead, I bought 40 envelopes only.  Amanda pointed that out and I said, “Well, I guess that won’t work.”  And it was totally cool!  At no point during the day was there a detail that would make or break my wedding and everything worked out really well.  (Obviously, that excludes the fact that if the vows hadn’t gone well or the groom didn’t show up, THAT wouldn’t have been so great.  But I had a lot of confidence in that working out!).

Mish was there when I came in- she was early and I was right on time.  She did an AWESOME job with my hair and I felt really beautiful.  During my hair session, Lois swung by with the bouquet and Brady went down to the lobby to pick it up.  The bouquet was GORGEOUS!  There were the most amazingly fragrent roses, lavender, cool purple filler, mums and succulent-like plants.  Unreal.  It was handtied and absolutely perfect!  Keely did my make-up and I felt pretty awesome.  Brady had her hair and make-up done as well.  Around 3:30, Willa showed up for the photography.  She did a lot of still shots and some action shots.  At 4:15, we headed down for the first look, which was a little silly but then the photo shoot was a lot of fun.  It definitely helped to dissipate some nerves!  Initially, I was kind of revved up but then I settled into our groove.  Mark looked wonderful- super handsome in a gray suit, darker gray shirt and purple tie.  His boutonniere was awesome and he just looked great!

We walked to the fire station, Hard Rock hotel doors, train tracks, Park at the Park and the Gaslamp.  People called out their congrats and it was a lot of fun.  Then Mark and the photogs headed to the venue while I took the long way.  I ran into Laddie and Carrie, got cheered on by the outdoor patio crowd from a local bar and was jubilantly greeted by most of Mark’s cousins who had been hanging out together at a bar across the street.

I went up the elevator and went to the back hallway where I was supposed to wait.  I said hi to the caterers, who were whipping up awesome foods.  They promised me a to-go box which I’m sure was phenomenal and I FORGOT at the end of the night.  (That’s ok.  I had the food at the tasting and a little on Saturday).  My sister came back after a few minutes and then my Dad.  And then it started!

Mark and I had chosen “All I Want Is You” by U2 as played by the Vitamin String Quartet.  Brady went first and apparently that got everyone to realize that the wedding had started!  My Dad and I started walking up the aisle and… 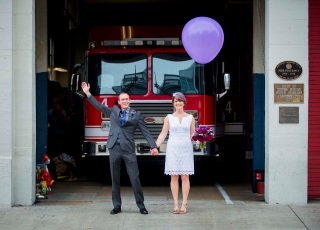 It was the most magical moment of my life.  It was so amazingly moving and beautiful to see all the love, affection and excitement in all my family and friends’ faces.  Everyone was so excited and it was for OUR marriage/wedding!  I really feel badly for guys that they never get to experience that incredible consuming feeling of surrounding love.  It was amazing.

I got up to the front and looked at Mark, who looked amazing.  The chaplain welcomed everyone and then my Dad gave me away to Mark.   I know that it’s a pretty patriarchal action but honestly, in the wedding, it was just a special moment of transition and ability to have my Dad be part of the wedding.  Mark and I stood in front of the chaplain, listened to the readings, said our vows, exchanged rings and kissed!  It was completely wonderful.  I couldn’t stop smiling and I was so, SO happy.

Afterwards, Mark and I walked out to “Love on Top” and did a little twirl at the end.  Then there were lots of family photos which got to be a *little* much at the very end but overall went really smoothly and efficiently thanks to our pre-planned groups list that Willa had us draw up. Then there were a few more couple shots and in no time at all, the cocktail hour was almost over.  Where were the sliders?!  (Eaten by others, ha ha.  We did get to try the beets/blood orange/burrata spoons, yum!  And although we didn’t drink much, apparently people were really throwing drinks back, which is awesome!).

Mark and I moved inside and Dad gave a really nice welcome speech/toast.  Then, the dinner stations were open (people started before the welcome which was good since it brought people in).  Dinner was a hit!  The steak was delicious, people thought the taco idea was awesome and the paella got rave reviews.  Dinner went for awhile (time was slightly fuzzy that day since there were no clocks around although Amanda was running a tight ship behind the scenes) and then it was time for the toasts.  Rip had a really nice toast welcoming me to the family and really saying lovely things about Mark and I as a couple.  Brady had the most amazing, cutest, moving toast.  She started crying at one part and I almost did too!  John had a brief but great toast that led everyone in a formal toast.  I can’t quite remember what I was drinking- I think I had champagne in a non-flute?  I really can’t remember.

After the toasts, Mark and I cut the cake with my Dad’s Navy sword.  Well, it’s sort of mine now but it’s really awesome and I was so happy to include it in the ceremony.  There was definitely no cake smashing- I don’t think we would have done it either way but we definitely talked about it beforehand.

Next, we went into the dances.  Mark and I had taken a lesson so we danced to “Lovely Tonight” by Josh Radin.  The DJ played a different version than the one we had practiced to but Mark’s iPhone to the rescue.  After, Dad and I danced to “You Make Me Feel So Young” by Frank Sinatra and Mark and Linda danced to “Over The Rainbow/Wonderful World” by Iz Kamakawiwo`ole.
Then, the dancing started!  It was an awesome dance party for the next few hours.  I can’t remember what Mike played first, but after about 20-30 minutes, my cousin Jimmy tripped over the wire and stopped the music.  Everyone boo’d.  Mike and Jonny took advantage of the time to switch up the DJ set-ups and Jonny tore it up with his set.  He was amazing!  He started with “Brown Sugar” by the Rolling Stones, which I never would have thought of for getting the dancing going.  Other songs he played were the old Ray Charles song leading into Kanye’s “Golddigger” (awesome irony for a wedding!), Gangnam Style, Kei$ha and so many more that I can’t remember.   I sort of hope I can get a setlist from him but if not, that’s ok. [I’ve remembered a few more! “Get Lucky by Daft Punk, “Treasure” by Bruno Mars, “Can’t Hold Us” by Macklemore & Ryan Lewis, “I Love It” by Icona Pop)

After about ½ hour, Mike took back over and continued the awesomness.  “Ring My Bell” and other songs played.  Brady and I danced to Rhianna and after awhile the crowd thinned, but Mark and I had a great dance to Beyonce “Love on Top” and “Lay Up Under Me.”  Then, I had Mike switch to more downtempo music b/c by that point, pretty much everyone was hanging around the bar or the firepit/couches outside and catching up.  The late night snacks of donuts and savory popcorn hit the spot.  People really, really liked the donuts!

Then, Mark and I left around 11:30 with the top tier of our cake, flowers, gift cards and stuff.  We forgot the to-go bags which I didn’t even realize until the next morning.

It was the most perfect, amazing day of my life and I am so happy and feel
so incredibly lucky and blessed!