After a night’s sleep featuring a battle between disoriented me vs the mosquito netting (winner still undetermined), the 4:45 alarm seemed very early indeed!  But it was time to see the sunrise over Angkor Wat, something I had read so much about.  We got ready with a pretty minimal amount of talking (SMS is not much of a morning person and even for me, 4:45 is pushing it!) and met our tour guide Mr. Mony in the lobby.

It was going to be a full day!  First we were off to the Angkor Wat complex to see the sunrise, followed by exploring the rest of the grounds.  Then it was off to the royal city of Angkor Thom and the Bayon temple.  Next would be the Elephant Terrace and the Leper King Terrace on our way to the overgrown temple of Ta Prohm.

We had bought our tickets the day before so we were set.  There is a main checkpoint on the road to Angkor Wat and then checkpoints on the way into all the temples.  We entered Angkor Wat across the West bridge into the complex.  Mr. Mony pointed out the naga serpent balustrades and the different conditions.  There have been many different periods of restoration at Angkor Wat starting with the French from the early 1900s-~1950 and then since 1992, the UNESCO heritage foundation with several individual countries helping at specific sites.  We went down to the NW corner by the reflecting pond in order to get one of the iconic images of Angkor Wat with the towers at sunrise and their reflections in the water.  It was very beautiful with the orange rising sun and changing light.  The ponds are rather low right now since we are in the middle of the dry season (Jan-June) but it was still very impressive.  I was so happy to be there and even though it has been seen and photographed by so many people, it’s still a pretty awesome experience and sight for me to see and share with SMS.  He’s the best travel partner and I think it’s especially fun when we’re seeing something together, both for the first time.

After sunrise, we headed towards the galleries on the second level.  Mr. Mony went into a lot of detail about the bad-reliefs and the stories they told.    The Churning of the Sea of Milk is the creation of the elixir of life by the asuras and gods pulling on the serpent Vasuki.  We heard a lot about that Hindu cosmology myth as we walked along the various panels. Next, we walked along the south gallery where we were taught a lot about the various tortures in the 32 levels of Hell. Don’t worry, heaven was covered too but in 37 levels and basically, everyone just looked really blissed out. Hell was where the action was and we saw the torture tree and punishments for food wasters, cock fighter organizers, liars and adulterers, just to name a few.  It was very specific and I told SMS that it was interesting that it was all at eye-level, like a candy aisle is for kids. SMS pointed out that Christianity can become pretty obsessed with torture (and martyrdom), which is a fair point!

Next, we walked around the second level with the bases of the five towers and the four rainwater pools. After being told about the third level, we walked up the central tower representing Mt Meru and took in the view from on high.  There used to be no easy way up but now there’s a wooden staircase built above the stone.

Afterwards, it was time for breakfast and we were pretty hungry. We went to the royal city of Angkor Thom and stopped at one of the bridges leading up to the South entrance gate. 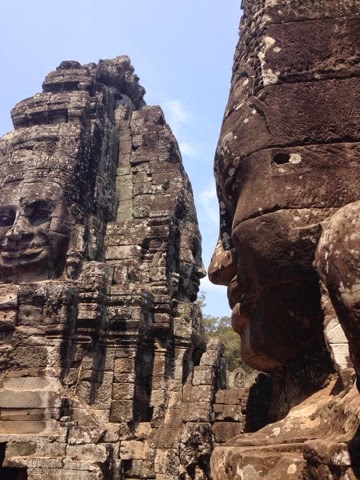 Then we headed to the Bayon temple and it was absolutely amazing. I loved all the Buddha heads emerging from the stone columns. The religious history of Angkor Wat originated as Buddhist temples with a conversion to Hinduism by later kings. As a result, Buddhas were either beheaded and affixed with Shiva’s head or a third eye was carved in. Fortunately at Bayon, they went the later route. After the Hindu kings, Buddhism came back but it seems that Buddhists were more mellow in their temple renovations, merely throwing saffron robes over the Hindu statues to make them into Buddhas. If only enlightenment was that easy!

At Bayon, we saw a small demonstration set-up on how the stones were laid in place. A lever system with guiding poles was used to lay the column stones down, which were usually licerite. Sandstone was used for the outside layer for decoration, color and carving.

Next, we drive out the Victory gate and drove by the Elephant Terrace, King’s stage and the Leper King Terrace. We walked around the terrace, which had several levels of interesting bas-relief.

Our final temple was Ta Prohm. It was so cool.  Ta Prohm was so overgrown when discovered that many of the trees were allowed to remain in place. It’s an overgrown jungle temple and absolutely stunning. The trees were spong trees with huge above-ground root complexes that twist and tunnel through the rocks. We saw several incredible trees and the whole area was almost magical in appearance. It reminded me a lot of Sintra, Portugal with its perfect juxtaposition of preserved ruins and surrounding vegetative overgrowth. It’s kind of a what comes from the Earth, goes to the Earth type of feel.

The three temples encompassed everything I had read about Angkor- the temple and towers of Angkor Wat (made cooler today by understanding some of the cosmology), the Bayon faces, and the tree roots and jungle overgrowth of Ta Prohm.

We stopped for lunch by the royal bath of the Srah Srang.  Then it was back to the hotel for an epic nap followed by a dip in the pool. We went downtown for dinner at Amok Restaurant where we had Amok vegetables and Khmer noodles with seafood. We followed it up with some gelato (at a place that seriously could be anywhere in the world- San Diego, Tokyo- it was borderline bizarre. And delicious).  Then we returned back to the hotel where I worked on this draft since it’s such a long post!