Today was awesome!!!  We had the most amazing road trip from Siem Reap to Phnom Penh with lots of great stops and touring along the way.

Before I get into those details, I have to talk about how my morning started: early.  I set my alarm to meet the tuk tuk driver at 530 to see the Bayon temple one more time before leaving.  It isn’t a temple famed for its sunrise, but I thought the faces were so cool and I wanted to see it one more time before leaving. The tuk tuk ride itself was worth the early wake-up.  It felt so vibrant early in the morning with the other tourists in tuk tuks, lots of mopeds and seeing the early stirrings as shopkeepers got ready for the day.  We drove by Angkor Wat in the early light and through the South gate of Angkor Thom.  Then we arrive at Bayon.  For awhile, I was the only person in the temple and it was so cool.  To walk among the rooms and columns in the shadows with no one else around was a spooky, spectacular experience.  I walked up to the outside level and admired the stone faces and was in a funny juxtaposed state of borderline sensory overload and a feeling of sublime serenity.  After about 45 minutes, I started to head out but got sidetracked at the “library” and climbed to the top to get an overview vantage point on the temple.  It was a great end to the temple visit and then it was truly time to go in order to get back for breakfast with my rested husband SMS.

Breakfast was delicious and the smoothie of the day was banana, which was an auspicious start!  We checked out of the hotel and got into the van with Mr. Mony and his wife, Mrs. Mony.  Our first stop was the stone quarry near Bang Mealea.  The quarry was were sandstone was cut during the dry season and transported during the rainy season in the canals.  There were clear areas where the stone had been cut with certain proportions in mind- sections of wall stones vs. columns, etc.  It was interesting but we were soon off to our next stop of interest, Beng Mealea. I was very excited to go to this temple because a nurse at work had recommended it and she had loved Cambodia so much, she had been five times during her three year tour. 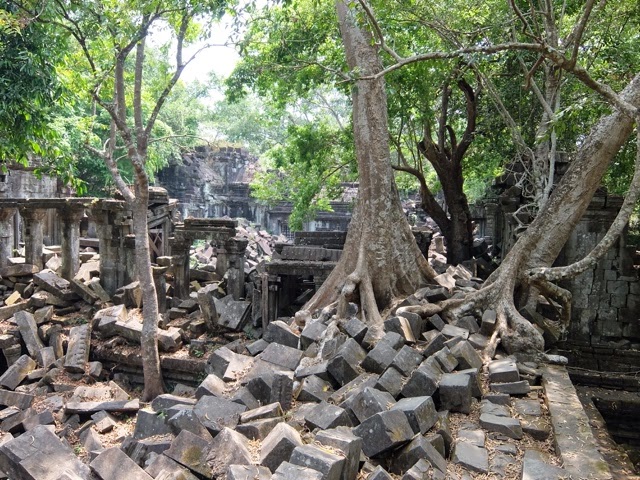 Beng Melea was incredible.  It was more overgrown than Ta Prohm and so incredible to walk through.  We climbed over fallen rocks, saw trees enveloping walls and climbed along the wooden elevated path through much of the temple.  I loved it!  It was so cool to see a non-restored temple and marvel at how well the construction was preserved even without help from conservationists.  I want to say it was my favorite site and maybe it was but at the very least, it was an incredible capstone temple to visit after all of the incredible architecture and monuments we had seen over the last two and a half days.

After the incredible tour, we rode in the car for a bit until we reached Spean Brab Teus (Kampong Kdei Bridge).  It is an 80 meter long bridge, over a thousand years old and still in use today for pedestrians and mopeds.  It is an incredible feat of architecture and we admired the several arches with their perfectly placed keystones and several layers of rock slabs on top that created the surface of the bridge.  It was very hot but highly worth the brief stop.

Then we had lunch in a “less-touristy” restaurant, which was my request.  I was getting a little fatigued of the tourist trap restaurants we had been going to around Siem Reap.  We had a delicious sour fish soup (the seasoning paste was sour, not the fish itself), chicken with ginger and a fish omelet.  My favorite was the soup- it was amazing with delicious sour sauce, lemongrass, ginger, garlic, white fish and pineapple. Yum!  The chicken was good but there are a lot of bones and SMS and I were having trouble figuring out how to cut the chicken and eat it.  The trade-off for a less touristy restaurant is  downgrade in toilet quality and no AC, which we had never sat in anyway.  I think it was worth it!

We piled back in the car and made a big push to our next destination, Spider City!  It’s a market at a bus rest stop where there are several vendors selling snacks, including bulk trays of fried bugs.  I tried a spider and a cricket.  I felt very adventurous but that was enough for me, mostly because there were a fair amount of flies and I was worried about my weak, “First World” stomach.  We also tried boiled quail egg, palm heart, candied lotus, candied melon and “Khmer donuts,” made of rice flour and sesame seeds.  It was an awesome foodie tour and I was so happy that Mr. Mony took us around.

Finally, we arrived at Phnom Penh.  By this point, the allure of sitting in the car had worn off but the road trip had been completely awesome and we were so happy we did it. We checked into the Willow Hotel.  We took a walk around the Independence Monument and ate at Sovanna, a famous Khmer BBQ restaurant.  We had grilled pork, beef/sour paste/water vegetable/ant larvae, and lemongrass chicken.  All of the dishes were tasty and it was fun to try more Khmer food.  We headed back to the hotel and went to bed.  Sitting in a car all day can be tiring! 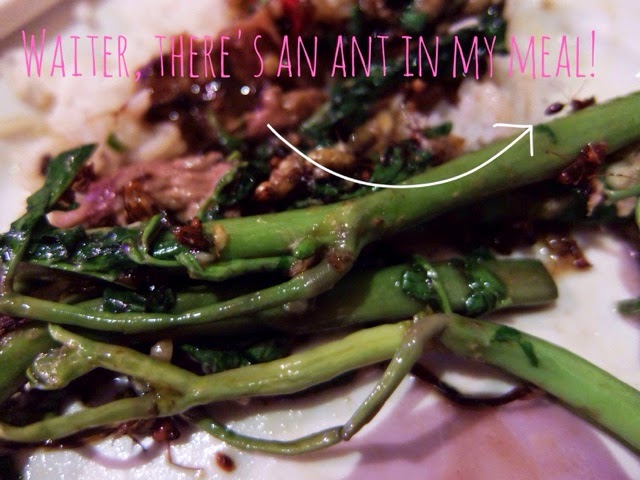