Today was a pretty epic tour of Phnom Penh. Although we saw a little bit yesterday with our walk around the Independence Monument park (complete with watching large group dance practice in the middle of a park across the street) and eating at Sovanna, I really wanted to see a lot more of the city that everyone seemed to recommend but that we were only able to stay in a short time, based on our other wish list destinations this vacation.

One of my favorite things from yesterday was figuring out how to cross the street. It is completely insane and fun at the same time.  Lane markers are but a suggestion and bikes/mopeds/tuk tuks will routinely go against the flow of traffic. So, in order to cross a busy street, a person has to have a little bit of timing, luck and courage to make it work. The good thing is that drivers expect craziness so they seem pretty vigilant. Another nice thing is that a pedestrian is almost part of the traffic pattern to so there is some accommodation. For example, unlike some countries I’ve been in (say, Italy, although in fairness, I haven’t been to Italy in 20 years), the drivers aren’t gunning for you. So, in video game terms, I’d say it’s more like Frogger rather than Duck Hunt.

Ok, moving on from that aside, SMS and I decided to take the Essential Tuk Tuk tour through our hotel. In the morning, we were going to the Killing Fields and S-21 Toul Sleng followed by the National Museum and the Royal Palace in the afternoon. Although it was strange to eat lunch after the morning visits, we ate at Friends restaurant, which is a training restaurant in its 10th year of existence and helps families earn money, send their kids to school, keep kids off the streets and in general, improve a lot of people’s condition.  While a lunch isn’t going to save the world, it was a great place to go and see a place where real, meaningful change is happening on a day-to-day basis.

The National Museum had amazing artifacts and works from the entire history of the modern Cambodia with a heavy emphasis on the Angkor period. I missed the Leper King but I saw some incredible bas-relief works in addition to a lot of Buddha heads. 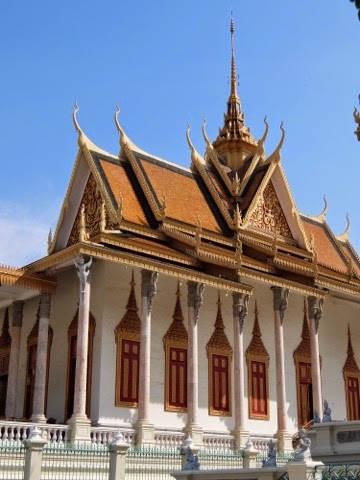 The Royal Palace was very impressive with gorgeous architecture, tons of gilding and gold leaf and the royal treasury in the Silver Pavilion. The Silver Pavilion was my favorite with the gold Buddhas adorned with diamonds and the incredible emerald sitting Buddha in the middle of the room.  How it survived looting and destruction during the Khmer Rouge is something I’ll have to read more about because I would have thought it would have been an easy target. 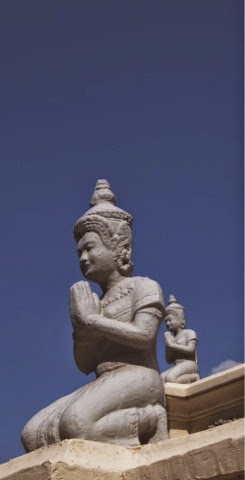 We hired a guide at the beginning named Parmar and he was very knowledgeable.  He told us about the grounds, royal residence, coronation hall, huge murals of the story of Rama, the building presented by Napoleon, the private museum of gifts from heads of States and diplomats and the former royal elephant stables.  The king only rode white elephants, for good luck.

We went back to the hotel for a bit and then headed for the Riverside walk in Sisowath Quay along the Bassac River, which runs back up to fill Tonle Sap, the huge lake in Cambodia.  It was a cool walk with lots going on- men playing hacks-sac, families picnicking, offerings at a local temple, people walking. We stopped at a rooftop bar to overlook the street and the action.  We left as lightning started to approach and went to dinner at Sher-e-Punjab. We made it with 5 minutes to spare before a huge downpour started. The dinner was delicious. SMS had a craving for Indian food and I felt we had done due diligence in trying Khmer cuisine. My favorite dish was the gobi tandoori (cauliflower) but we also had roti, paneer naan, daul and veggie pakora.

We took a tuk tuk back to the hotel and called it a night. Tomorrow, we leave Cambodia and head to Thailand for jungle adventures in Khao Sok followed by rock climbing in Railay and Ton Sai. Can’t wait!