SMS and I just returned from an amazing family trip in Steamboat Springs!  For the past several years, my family tries to meet up for a destination Christmas vacation.  For having six people plus significant others, we do pretty well in all getting together.  It doesn’t always work and this year, unfortunately, Joe didn’t make it but for one of the best reasons of all.  He and his wife are now proud parents to their beautiful baby boy who was born a little over a week ago.

The rest of us toasted their good fortune.  We had an incredible time in Steamboat Springs and I’m sad it’s over!  SMS and I flew in Sat, 12/19 and we all went to the slopes to see the torchlight parade and fireworks.  For the “torchlight” parade, the ski/snowboard instructors went down the mountain holding a flare in each hand.  It was pretty cool-looking and the emcee was pretty hilarious in his deadpan, Captain Obvious, possibly Colorado Cannabis-affected statements- “They’re almost here….almost here…as it gets brighter, they’re getting closer…when you can see them, they can see you…”  Anyway, not very funny when it’s typed out but it was a little funny at the time.

Mom made several feasts for the family and it was spectacular to be fed so well.  Dinners included Bubba burgers, chicken enchiladas, beef stew in double-cooked mashed potato bowls (incredible), Hungarian Chicken with egg noodles and an incredible “Christmas Eve” lamb dinner.  Lunch was sandwiches and homemade soup.  SMS and I went back on two of the four ski days and it was tasty and warming.  It was completely wonderful.  My favorite was the homemade chicken soup- yum!  I would be getting hungry as I type this but I think I’m still stuffed!

The focus was mainly on skiing and snowboarding (sister!), which was pretty intense!  The first day of skiing was Sunday 12/20 and it was close to a bluebird day although clouds moved in later in the day.  After that, game on!  It snowed approximately 2.5 feet in the next three days.  The snow varied in intensity, but overall, became stronger as the three days went by.  There were near blizzard conditions at the top yesterday with high winds but overall, the winds weren’t too bad and the daytime temps were in the 20s and low 30s.  The low winds were key for pleasant lift rides.

All of the powder made for some incredible skiing.  The mountain is huge and I think I made it to only a third of the runs.  The blue-blacks were my favorite because of the small moguls which added some nice texture to the runs.  Blacks were very mogul-y and double blacks mainly consisted of tree chutes.  The difficulty level was based mostly on mogul and tree presence it seemed.  I didn’t see any runs that were overly steep and scary although every time I looked back, I was pretty impressed at the amount of trail behind me.

My favorite run was on the last day when I was on “See Me” and cut through to “Vagabond” through a field of knee-high powder.  It was unreal.  I had so much fun and really, these past four days were the best skiing of my life, conditions-wise.  I felt I skied pretty well, but I’m starting to get a tiny bit slower.  SMS had a great ski experience- we think all the roller skating really helped with his speed and balance.  Not that it was bad before but he was a speed demon and mogul aficionado this trip!

SMS and I also had fun night-skiing on the second night we were there.  The trails were well-groomed and almost empty.  The runs were beautiful glides and turns all the way to the bottom.  I’m so glad we tried it but the best was skiing with family.  We did a pretty good job of meeting up throughout our days there.  Dad bought walkie-talkies that were actually really helpful and a lot of fun to use. 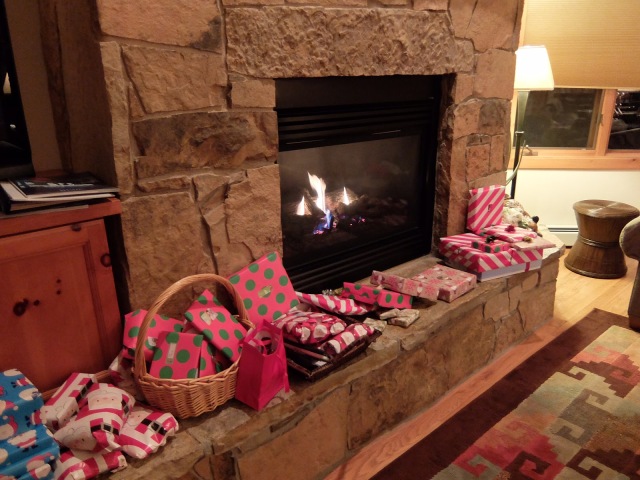 Last night, we had our “Christmas Eve” with an awesome gift exchange.  I cheated and wrapped up a few travel presents from our Spring Thailand trip but don’t worry, we got everyone real gifts too!  Brady, SMS and I went in on a Garmin for Dad.  I also wrapped up a book I had for awhile that I thought he would like, Dad is Fat by Jim Gaffigan.  Initially, I wrapped it in with the Garmin but I thought it might give him a complex.  Mom got bath bombs and Brady got an Angor Wat temple book with overlays that imagine the original splendor over the current ruins.

Mom gave us our stockings which was really sweet and nostalgic.  The detail is incredible and the stockings bring back so many awesome memories.  Mom and Dad also got us little flying drones and everything stopped for about 10 minutes while we played with them.  I haven’t had such a fun toy experience like that in years!  The girls also received really pretty earrings from the National Gallery of Art and a new ballerina jewelry stand.  Ed and Meg got me a Corkcicle Canteen, which is one of Oprah’s Favorite things, which is awesome since they now live in Chicago where Oprah is a very big deal (is there anywhere she’s not?).  Brady got me the Alabama Shakes album (yeah!) and Brain on Fire, which is a memoir I’ve been wanting to read for awhile.

Overall, Christmas 2015 has been incredible and I feel really lucky and happy to have such an amazing family!