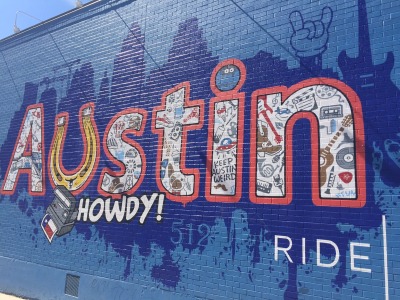 As a gainfully employed engineer in the private sector, SMS doesn’t get that many Federal holidays off.  When I realized that he did have Presidents’ Day off, my travel-loving mind started scheming.  Result: weekend in Austin!  Neither SMS nor I had ever been.  It sounded like a lot of fun and, possibly, even warm!

The weekend was awesome!  I booked an AirBnB in South Austin, which was a little further South than I originally thought looking at the map.  But we overcame with a combo of a rental car and the two bikes that we could use through our apartment rental.  I had looked for hotels downtown but they were really expensive.  I suspect it was a high-demand weekend because of the Austin marathon.  I briefly thought about running the half but then decided I’d rather spend all of my time with SMS and eating queso, not necessarily in that order.

We arrived around midnight and then spent the next hour and a half waiting to pick up our rental car.  Yuck.  I got a great rate through USAA but I think I’m also going to use a credit card benefit and sign up for the Rewards club to expedite car retrieval.  At this point, I have a few too many experiences with long rental car waits and I think I’ve finally learned my lesson.

The next morning, we slept in a bit and then we were off to explore the city.  Based on the weather, it was going to be our one sunny day so we wanted to take full advantage.  But first, food!  We headed over to Hillside Farmacy, which had great brunch write-ups.  The restaurant was super-cute and had great coffee.  My dish, though, was way over salted and because I was so hungry, it took me about 1/3 of the way through to figure out what was wrong.  So, meh breakfast for me (it’s the grits in case you want to avoid!) but SMS had a great egg sandwich. 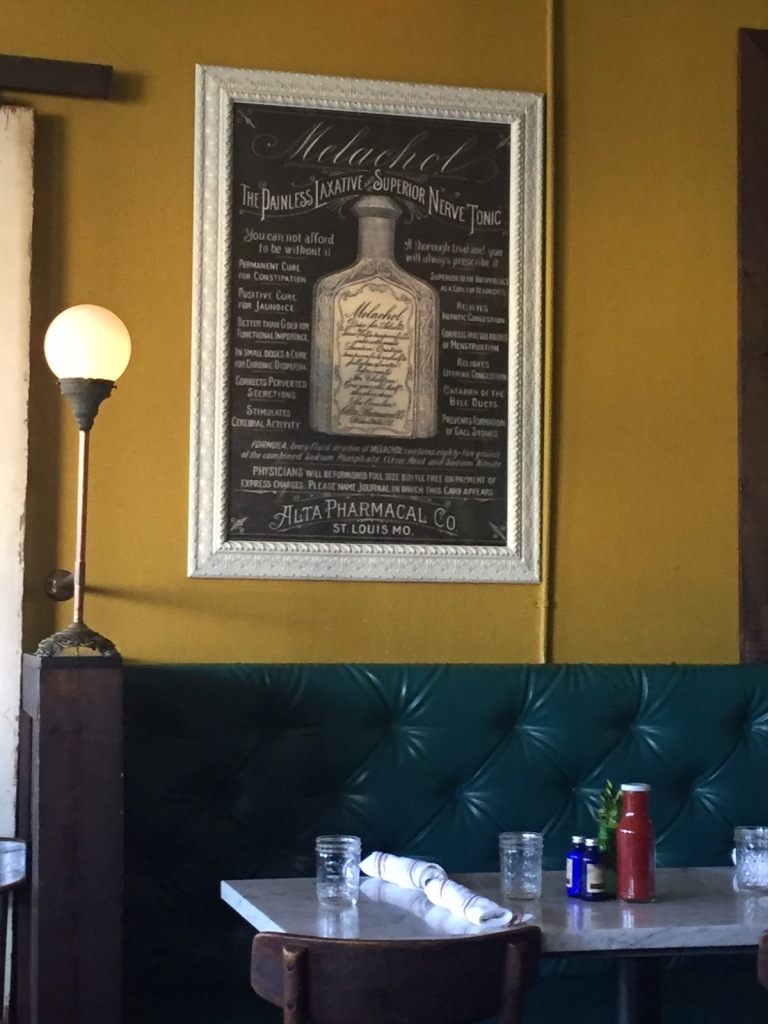 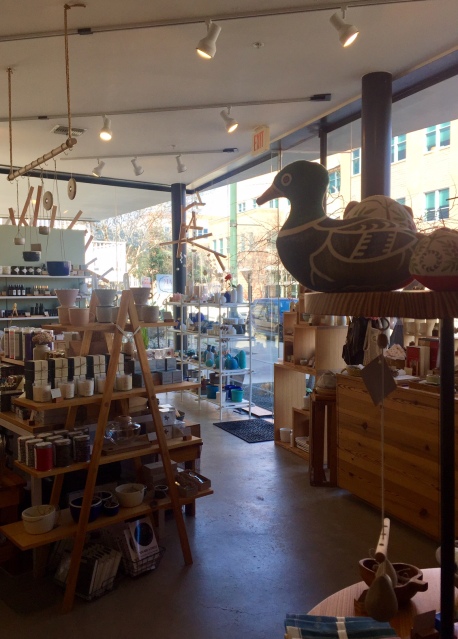 Afterwards, we walked up and down E. 11th St.  We saw pretty mosaics and the insane tailgating atmosphere line of Franklin’s BBQ.  We also browsed in a beautiful shop called Take Heart.  It was full of Japanese ceramics and home accessories, all of which I wanted and none of which I needed.  You know the type of store.  I escaped unscathed but with the dull ache of needing a new aesthetic.

Afterwards, we walked down Rainey St, which had a lot of construction and is definitely more of a nightlife destination.  We walked to the shore of Lady Bird Lake and then went on an urban hike to find Amy’s Ice Cream.  We walked through a farmer’s market where I learned about tea made from a Texas weed.  Then we reached Amy’s, which was quite delicious.  SMS continued his streak of winning orders with his gingersnap ice cream although my ice cream wasn’t that far behind his in terms of deliciousness.

We took a Fasten ride back to the convention center where we had left our car.  Then it was off to Barton Springs swimming hole!  There’s no fee in the Winter, but unfortunately it was closed for the week for critical pipe maintenance.  Le boo!  A lot of people found out upon arriving and since traffic and getting a parking space was such a hard-won victory, we decided to stay.  It was such an amazing day with temps in the high 80s(!).  We went swimming in the creek below which is a little disgusting since there were so many dogs but we figured we would be ok as long as we didn’t submerge our heads.  We had a really fun time and it was a great dip.  No pictures, unfortunately.  I didn’t realize until researching later but there are a lot of other swimming holes in the Austin area.  Next time, I’ll bring better walking shoes and explore some of the other spots.

We went home to take a shower and then we went to Salt Lick BBQ.  Oh.my.lines.  There were so many lines.  Really, I felt like Austin was a city of lines.  I couldn’t get over it and yet, we stood.  Ultimately, we got into the “To-go” line and ordered delicious BBQ but I really don’t think I could ever find BBQ worth it enough to go through that type of wait.  Between the two of us, we ordered turkey, ribs and brisket on combo plates.  In fairness, it was really good.  But the two locals in line ahead of us assured us that the lines were not at all typical.

I also learned “the rules” of bocce ball, at least according to SMS.  While I fully acknowledge that my rules might parallel Calvinball, I still find SMS’ interpretation suspect.

The next day, was cloudy and a little cooler.  We went to Seventh Flags coffee and ate breakfast tacos from Mellizoz taco truck.  It was delicious.  We had biked there on the rental’s bikes, which were single gear cruisers.  As Austin was hillier than I realized, it was a bit of a workout.  Fortunately, I ate about 7,000 calories that day so don’t worry about me!  After the bike ride and a rest, we went to Shake Shake, which I’ve read so much about!  I was so excited!  I got a cheeseburger and a Black and White shake.  So yummy!  I highly recommend and someday, I will definitely be back for a custard creation.

Afterward, we went over to Lick and…yes, I got ice cream there too.  A lemon curd/pink peppercorn along with goat cheese and thyme.  The flavors were really subtle so it just tasted like delicious creamy ice cream although in fairness, my ice cream palate may have been blunted by that point 🙂

Afterwards, we went exploring and headed to Mt. Burnell and looked at all of the mansions along the Colorado River.  I liked all the two-boat garages/docks along the river.  One boat just isn’t enough.  I’m such a plebeian but even I know that!

Then it was on to the slightly more low-brow, but also awesome, Graffiti Wall at Castle Park.  People were actively spraying their names, along with a few talented artists working on larger projects.  If we ever go back, I would like to bring a can of spray paint with us!

We went to Gordough’s public house for a beer. There was an outdoor area with picnic tables and the weather was completely delightful.

For dinner, we went to Matt’s El Rancho Tex Mex restaurant.  It was pretty good.  It’s been around forever- LBJ ate there!  I ordered queso there too.  I would like to point out it was a small size.  SMS was still pretty disgusted with two queso orders in one day!

The next day, I wasn’t particularly hungry.  What?!  Why?!  But we went out to Fair Trade Coffee and then ordered Gordough donuts.  I didn’t finish mine but it was a sugar bomb delicious treat.  Then we checked out of our AirBnB.  *sniff*

We went to the Texas History Museum, which was interesting.  It’s amazing how tumultuous the State’s history is.  First, they were a province of Mexico.  Then, they became an independent country.  Finally, they became a U.S. state.  These changes all occurred between 1835-1845.  It must have been a head-spinning time to live through!

Afterwards, we went back to the SoCo area and walked around looking for a lunch spot.  We ate at Cafe No Se, which was delicious and most importantly, rather healthy!  I was craving vegetables at this point!  The restaurant is located within the South Congress Hotel.  The hotel, shops and restaurants are beautifully decorated.  I had a grain bowl.  We followed lunch with a  coffee from Mañana.

Then, it was time to bid Austin farewell.  We went to the airport and hung out together for our flights.  It was a great weekend and we really enjoyed our first, and probably not our last, trip to Austin!