The biggest highlight of all was my beautiful sister, lovely husband, and cutest baby had their wedding/celebration of love in Minneapolis.  They held it at Summit Manor but the whole weekend was a whirlwind of festivities and family time.  The wedding itself was 1 Sept so here we are with the main event in the proper month highlights (some sort of system is needed for this mega-summary approach to the second half of 2019!).

The wedding was awesome!  Brady and Ricardo have awesome family and friends.  SMS and I had the best time aaannnnnddd…I got to give a MOH speech!  Brady was such an amazing MOH that I wanted to be one to and, at a minimum, I didn’t embarrass myself!  I also did some important MOH duties like booking a group nail appointment (which I missed due to flight delays) and day of make-up and hair for the bride!

The day after the wedding, we went down to a brewery that SMS had found.  We wanted to ride scooters but thought, no way would four show up all together and…manifesting to the universe worked!  There were four scooters in a row and away we went, me bringing up the rear as a scooter chicken!  SMS and Ed were the bravest, going off-roading down a grassy hill with zero casualties.  Good job!

I got the beer sampler and, as luck would have it, got the confused newbie who gave me medium sized cups instead of the sampler cups.  My sister-in-law was very jealous to which I say… 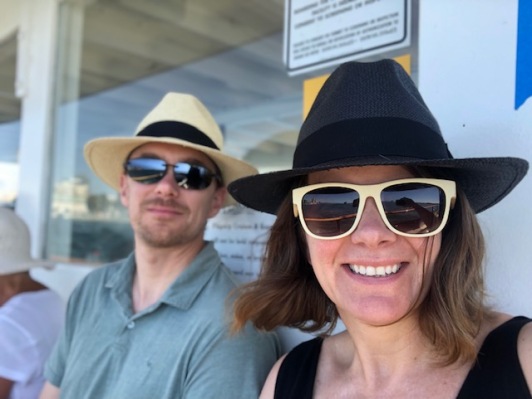 Here are a few shots of SMS.  On the left is in Minnesota and on the right is somewhere in the Bay Area the next weekend.

Below is a New Yorker cartoon I find very funny.  I think I’m going to order a print of it. 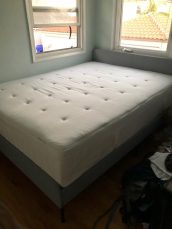 Above are a few photos from Coronado.  Left to right, a pretty sunset; my balcony garden; SMS being the consummate law-abiding pedestrian waiting for the walk sign without his renegade wife; the queen-sized Ikea bed I put together myself!

I saw three author talks in San Diego: Colson Whitehead (Underground Railroad, The Nickel Boys), Rebecca Makkai (The Great Believers), and Bruce Holsinger (The Gifted School).  All three were excellent.  I liked Bruce Holsinger’s talk the most because it focused a lot on the academic practice of writing since both he and the interviewer are Literature professors. 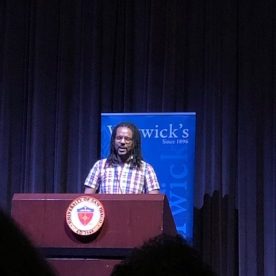 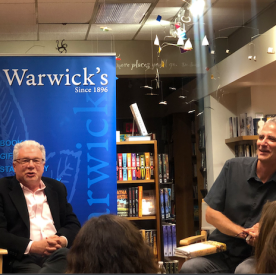 We went up to Sonoma with Rip and Linda for two Harvest Parties: Medlock Ames and Lancaster with a stop at the Hawkes tasting room.  It was an awesome weekend.  I love Medlock Ames wines and they threw a great party!

On Sunday, we went to Armstrong Redwoods State National Preserve to walk among the Redwoods, which I think is the thing to do since there aren’t too many old-growth redwood stands around! Logging was so widespread in the 1800s that most redwood forests now are second-growth and while impressive, do not even approach the size of the 1000+ year old trees! 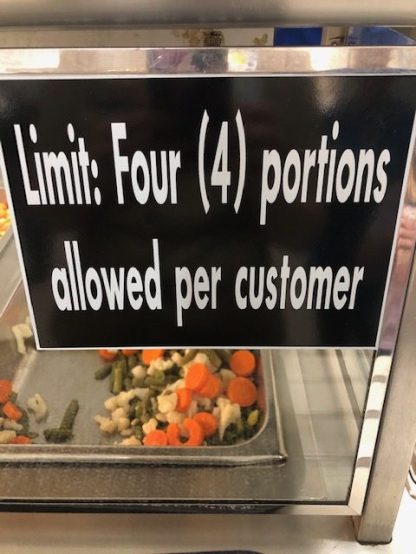 SMS and I got up and decided that we should hit the road in order to explore Guerneville and Armstrong Redwoods State Natural Reserve during daylight hours.  First, we needed fuel.  We stopped at Nido for scones (not as good as I remembered but still really delicious) and Temple Coffee for a tall French press.

We drove for awhile and SMS mentioned that he was starting to get hungry.  Well, I’m no fool.  I have been in the past but I now know that the slight mention means it’s time to start thinking about a food stop sooner rather than later.  I did a little Internet sleuthing and found Yanni’s Sausage Grill.  It had rave reviews and I know SMS likes his links.

It was a completely awesome experience.  Yanni and his wife Fran are so sweet and nice.  They gave us their recommendations in addition to a free sample of their “Greek chili.”  We ordered a lamb sausage with onions, Greek sausage with pepperoncinis and Greek fries, covered in dressing and feta.  The food was delicious.  At the owners’ suggestion, we took it next door into the Penngrove pub where there was more seating and it was much warmer.  We sat at the bar with several locals who were quite nice and interesting to talk to.  There was one eagle-eyed woman who spotted the health inspector’s car and told the bar tender to wipe up the water and lose his drink.  The bar passed with flying colors, although I think it would have been fine even without the tip!

After a really nice lunch, we headed to Guerneville where we went into a few shops on the main street.  The old bank has been converted to a few shops within its interior and Big Bottom market also had excellent food for picnics.

We decided to check into the Boon Hotel, which was very retro chic.  It reminds me a lot of the Pearl hotel in San Diego.  Our room was great but since the clouds were starting to part, we decided it would be best time-wise if we checked out the Armstrong Redwoods that day. 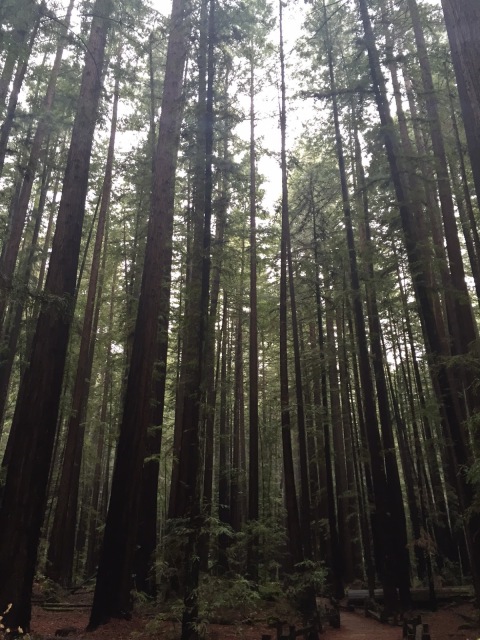 We went a little ways up the road and parked near the Reserve entrance.  There was only a charge if a car drove into the reserve and we decided to walk along the trail.  Nothing fancy or long, just enough to see some of the oldest redwoods, 1300-1400 years old! 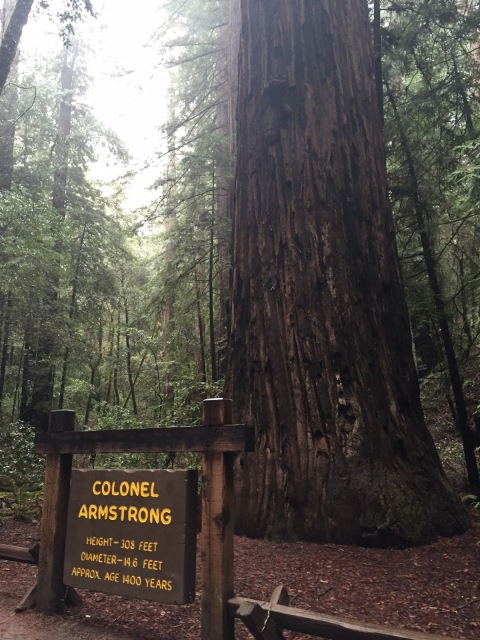 The park was really special and majestic.  The colors were brilliant thanks to the recent rain and lingering mist.  I loved the green-gray with hints of purple the best that I could see in some of the bark and lichenous material. 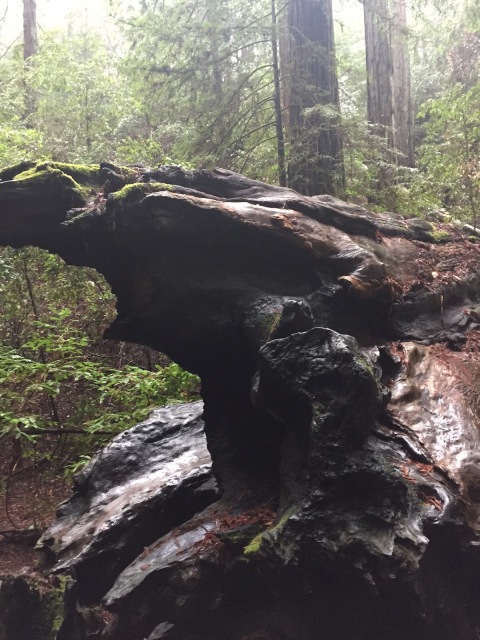 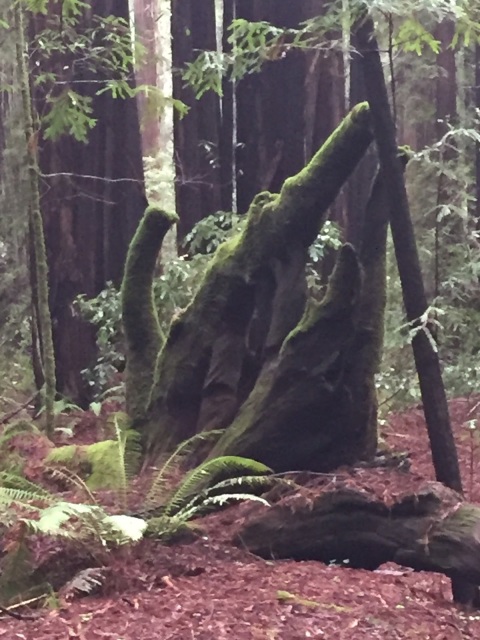 We headed back to Boon and warmed up in the hot tub.  We relaxed in the room for a bit and then SMS went out for a quick dinner.  I stayed behind since my stomach was suddenly under duress for a couple of hours, likely due to the crazy spicy green papaya salad that also, weirdly, smelled of hot dogs when we took it in a to-go box (which I threw out, to the annoyance of SMS who wondered why I even took it to go at all!). 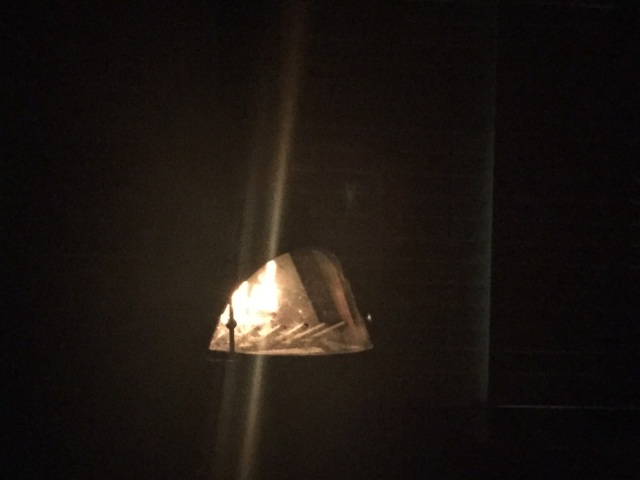 When SMS got back, we lit a fire, which was super cozy.  It was a great day and we saw a lot, really making the most out of a day that was mostly gray and drizzle-y.